Located in the Vancouver suburb of Mill Plain, it’s among the first wave of enhanced pharmacies where customers not only can fill prescriptions but receive direct medical care for a range of common ailments that would otherwise require a trip to a doctor’s office.

“The more people learn about how much pharmacists can do, they’re realizing that a pharmacy really can be much more,” says Matt McCarty, who manages the Mill Plain pharmacy. “Our ultimate goal is taking care of the patient.”

From a clinical room alongside a separate waiting area, McCarty and his pharmacists are treating urinary tract infections, swimmer’s ear, and nearly two dozen other common ailments as part of a pilot project with Washington State University’s College of Pharmacy. They’re also able to treat burns, yeast infections, dog bites, strep throat, and severe headaches, including migraines. And, they administer a range of vaccines and shots, while providing emergency prescription refills for a variety of conditions.

Think of it as a cross between a traditional neighborhood drug store and a window into the future.

As physician shortages worsen, pharmacists and other health science professionals are preparing to take on greater primary care roles. Some medical organizations already are transitioning pharmacists onto patient care teams, and at WSU all health and medical science students now train collaboratively in an effort to enhance overall care.

“You have these highly trained, highly under-utilized health professionals,” says Julie Akers ’99 DPH, an assistant pharmacy professor at WSU who researches health care access issues. “People may see their physicians maybe once a year but many see their pharmacists at least once a month.”

Additionally, pharmacies are as much a part of American neighborhoods as the local grocer. As of 2012, according to an industry study, 93 percent of Americans live within five miles of a retail pharmacy, many of which are open 12 to 16 hours a day, seven days a week.

Akers and Linda Garrelts MacLean ’78, associate dean for advancement at WSU’s College of Pharmacy, are studying the effectiveness of pharmacy-based treatment as part of a four-year research grant from the National Association of Chain Drug Stores Foundation. The goal is to develop baseline data that can be used to measure how enhanced pharmacy services are affecting health care quality and access.

Although they suspect the study will find the cost and quality is comparable to the same type of treatments provided at doctor’s offices, urgent care centers, and hospital emergency departments, Akers and MacLean stress it can’t replace a family physician.

“A key priority for the research team was to design the care protocol to ensure the patient’s primary care physician was included in the process,” Akers explains. “We also have a physician advisory group to periodically review our protocol and be our sounding board.”

Making it possible is Washington’s generally progressive approach to pharmacy practice. It’s among a handful of states that extend broad treatment authority and in 1979 became the first in the nation to grant prescriptive authority to pharmacists who enter into working agreements with local physicians.

“There’s so much potential for what can happen,” says Akers. “This could really help in rural settings, obviously, but even in urban areas you can still have access and availability issues that pharmacies are well positioned to help with.”

Fred Meyer already was moving toward enhanced operations at its pharmacies in southwest Washington.

Previously, for example, it had developed working protocols with local physicians to provide pharmacy-based smoking cessation services. Its pharmacists also are available for international travel consultations and able to administer required or recommended vaccines as well as prescribe motion sickness remedies for those embarking on ocean cruises, for example.

“Pharmacists have strong backgrounds in health sciences,” says Crystal Bryan ’10,’12 DPH, who is director of clinical services at Fred Meyer Stores. “Getting people working at the top of their license would free up some of those wait times to see a physician.”

The pilot project launched in September, and some of the company’s Vancouver-area pharmacies already are seeing customers from across the Columbia River in Oregon who’ve heard how quickly they can get treated for certain conditions in Washington.

Getting to this point has taken a combination of educational advancements, professional development, and legislative intervention.

Then, pharmacists took on greater therapeutic counseling roles, working directly with their patients to help them understand how best to use prescribed medicines and evaluating dosage levels and medicinal interactions. About the same time, many states expanded the authority of pharmacists to directly administer vaccines and other shots.

The expansion into clinical treatment has long been seen as the next logical step, but the reluctance of insurance companies to reimburse pharmacists for services beyond the cost of dispensed medications has been a stumbling block.

In Washington, state law requires insurance companies to reimburse licensed health professionals for authorized services they deliver. It’s how medical centers and clinics are able to get reimbursed for services provided by nurse practitioners, for example, or physician assistants.

But insurance companies had excluded pharmacists, even though the same procedures were covered if performed in a doctor’s office.

“It was absolutely ridiculous,” says state Senator Linda Evans Parlette, a ’67 WSU pharmacy graduate. “I have worked on this since probably 2007.”

It took a legal ruling from Washington’s attorney general and the intervention of a bipartisan panel of state lawmakers to change that.

Pharmacy faculty at WSU and the University of Washington are assisting in its implementation. The new requirement, which is being phased in through 2017, puts Washington at the forefront of enhanced pharmacy clinical services nationwide.

“Most community pharmacies haven’t fully explored the extent of what they can do,” says Akers.

Meanwhile, as the legislative battles were being waged, health care organizations that don’t rely on insurance reimbursements have been transitioning pharmacists into greater primary care roles for a while.

At the Mann-Grandstaff Veteran’s Administration Medical Center in Spokane, for example, clinical pharmacists are handling some of the more routine patient exams.

They primarily monitor drug interactions and the effectiveness of treatments that rely heavily on prescription therapies, such as high blood pressure and cholesterol. By assigning certain follow up visits to licensed pharmacists, who can bring in staff physicians if necessary, it gets patients in quicker and enables medical doctors to focus on those with more complex needs.

“We’re looking for the best outcome and pharmacists are very good at coaching a patient along,” says Sunil Wadhwani, the medical center’s chief of pharmacy. “They’re functioning as a part of the primary care team.”

Wadhwani has worked closely with WSU’s pharmacy college. “We provide a rich environment for training,” he says. “The VA is at the front end of these changes and improving patient safety.”

Enabling the enhanced roles is the increasing academic and clinical preparation that pharmacy colleges have built into their curriculum.

“For the past 10 years, all pharmacists entering the profession have earned a doctor of pharmacy degree,” MacLean notes. “What this means is we are trained and have the credentials to be decision-makers and health care providers.”

Additionally, all of WSU’s health and medical science programs emphasize cross-disciplinary cooperation. That emphasis soon will be moving beyond classroom simulations.

A 43,000-square-foot medical clinic nearing completion at WSU Spokane will house a physician residency program that also will enable nursing, pharmacy, and other health science students to gain practical experience working together as primary care teams.

“As medicine becomes more sophisticated, it’s going to take all health care providers to deliver it,” Brown says. “Especially in rural areas where many of our future doctors, nurses, and pharmacists will practice, the ratio of health care providers to population is low and they will need to have knowledge of each others’ skills … often providing care that was previously exclusive to one field.”

In Spokane, where WSU’s health and medical programs are located, exposure to the team approach begins early.

That training includes simulations based on actual medical cases and uses local actors and actresses who have been trained how to behave during exams and how to respond to various questions that might arise from the student teams. The cases typically involve multiple chronic conditions, such as asthma and anxiety.

“Each profession brings its own roles to the care team,” explains Barb Richardson ’10 PhD, a pediatric intensive care nurse who now serves as director of WSU’s Interprofessional Education and Research program. “It’s important that the students know how to communicate with each other and … it’s better to have them learning in a simulated setting where it’s OK if you don’t get it right the first time.”

Those studying to become medical doctors, physician assistants, and nurse practitioners do the actual diagnosing but often must rely on the expertise that the other members of the team bring from their fields of study, such as nutrition and occupational therapy, to determine the proper course of treatment.

“We’re looking for them to learn how to work together,” Richardson says, “because we want to make sure that next generation of health care leaders is prepared and workforce ready.”

Back in Mill Plain, few know better than McCarty the emphasis WSU places on clinical services and interdisciplinary cooperation.

He entered the workforce nearly two decades ago and, like many veteran pharmacists, it took a bit of a shift to prepare for the challenges of providing pharmacy-based treatment. He embraced the challenge, though, and now strives to help others understand how much the profession is evolving.

That’s why when a patient arrived at the pharmacy for a clinical procedure not long ago, McCarty called over the intern to observe and help out.

“He was one of our WSU interns and I thought I’d bring him in to assist and show him where the profession is heading,” McCarty recalls. “I figured it would be a great learning opportunity and I’d have a chance to really impress him with how much things are changing.”

But it was McCarty who ended up being impressed.

“He looked at me and was like, ‘Oh yeah, we’ve been doing this in school,’” McCarty says. “Here I thought I’d be showing him something new and for him it was already a part of the job.”

Here are some of the common ailments and conditions that pharmacists who have working agreements with local physicians are able to directly treat: 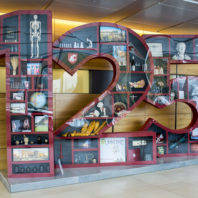 Celebrating 125 years of pharmacy at WSU 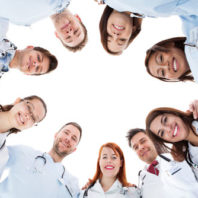 A team approach to health care

Training medical professionals to work together for treating patients.