Back in 1991, the Snake River sockeye was the first of nearly two dozen salmon populations listed as threatened or endangered. To fishermen, scientists, and wildlife managers it seemed that salmon might soon vanish from the waters and traditions of the Pacific Northwest.

Today, many runs are coming back, while more vibrant populations in the Pacific Northwest and Alaska have continued bringing a steady stream of salmon to our plates through the summer, into the fall, and thanks to flash freezing, the winter. Salmon remain a major part of the region’s culture and cuisine, as five Washington State University faculty and alumni can attest in these interviews edited for length and clarity.

Jeff Vervoort, commercial fisherman, professor, WSU School of the Environment: Each summer I go up to Bristol Bay, Alaska, and work my fishing boat. What I like about it is that in my normal university job I’m thinking about countless different things at once—different projects, different collaborators, university stuff. It’s just a never-ending list of things to do. When you’re up on the boat, there’s one thing that you’re focused on and that is catching fish. And I’m by nature a very competitive person. It’s not because I want to make more money. I just want to catch more fish than anyone else, especially my friends and the people that I fish with. That is just how fishermen think. I’ve actually been pretty successful with fishing, which is a source of pride for me because I’m just an isotope geochemist competing against full-time commercial fishermen.

Ideally you get in a place where there aren’t other boats and you lay your net out and it just explodes with fish. There’s a long cork line and you look down and you see fish hitting all the way down the net. It’s a total adrenaline rush. If you can stay on the fish, that’s what’s really cool. You can fill the boat that way. That’s a good day. Our boat doesn’t really comfortably hold more than 18,000 pounds under the hatch covers. After that, they’re on the deck. 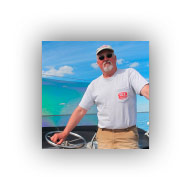 Doug Thomas ’87, president and CEO, Bellingham Cold Storage: In 2010, we had a sockeye fishery out of the Fraser River around the corner from us and it was the second-highest sockeye fishery catch since 1913. That was big. This year they’re predicting an even larger amount. We’ve been doing a better job as a society of taking care of our rivers and streams and creeks and storm water. And we’ve been doing a better job of fisheries management. That’s why we’ve seen the health of the fishery come back, because we’ve been more responsible with the resource.

The fresh season is an exciting time around here. We’re working 24/7 and it’s literally all hands on deck. I’ve been in the industry most of my life and I just love being down here at 2 o’clock in the morning with boats coming in across the bay and everybody’s working. Sometimes people will work for six or eight weeks at a time without a day off but it’s exciting times. I’m an operations kind of guy at heart so I like getting out there, jumping on a forklift and helping out sometimes just to be in the mix.

If you come in the middle of August and you come down in an afternoon or evening when all the boats are coming in, it’s a really neat experience to watch all the action going on. There will be days where there’s a million pounds of product presented to us at the dock. We’ve got to take care of that product and then the next day, another million pounds. 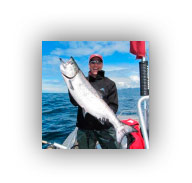 When the tribes are working with the feds and the state and dealing with the spring fishery, the first allocation of any kind for the tribes is to ensure that fish are available for ceremonial purposes, most notably the longhouses, because the longhouses celebrate the return of the fish each year in the springtime. The commission has a meeting off-site maybe two, three times a year and the Washut ceremony is a way for the tribe to welcome the four tribes from my organization on to their reservation and provide an opportunity to share a meal with them. It’s part of the culture. It’s pretty fulfilling to hear the drums and the singing. Closing your eyes, it puts you into a different realm and you can just recognize, going back in history, how important those ceremonies are to the tribes. It’s something that really fills you spiritually and makes you recognize that these words and these songs that are telling stories are going way back and they’re there for a reason. It’s a way to honor the fish that are returning, that are giving you life, and they’re giving up their life to give you life.

Bill Young, ’97 PhD, project leader, Nez Perce Tribe Department of Fisheries Resources Management: One of my main duties is to go out and survey salmon spawning areas. I’m amazed that these fish swim so far. They start out as these little tiny juveniles that we collect as part of our monitoring. They’re 3 or 4 inches long. They go out and disappear into the stream and when they come back they’re 10, up to 20 pounds. Big. They swim hundreds of miles. Some of our sites are 6,000, 7,000 feet in elevation, these little streams where there’s not enough water to cover their backs.

The males do a lot of displaying early in the season and they’ll swim around and try to look as big as they can. They stick their dorsal fin up and display to each other, and the water is so shallow they look like sharks.

In ’95, there were actually less than 1,000 wild salmon that came over Lower Granite Dam for the entire Snake River. That’s when I think everybody thought they were probably not going to make it. But things turned around. The ocean turned around. I think the hydro system is better at getting fish through now. And this year they’re predicting 40,000. Things are getting better but we still have a long way to go. 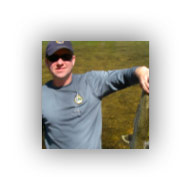 Barbara Rasco, professor, interim director, WSU and University of Idaho School of Food Science: Most people in the United Sates overcook fish. Then it will tend to get hard, particularly fried fish. It will tend to get woody and powdery, depending on the species. It’s not tasty anymore and the texture isn’t good. When we cook fish, for any cooking method, we try for 10 minutes for each inch of thickness. Then a typical test is to stick a fork or a filet knife in between the fibers—myofibrils is what they’re called. Open them up as soon as they can flake and it looks like the tissue has become opaque. Then the fish is done.

Fresh fish is not necessarily better. I would much rather have salmon that was frozen on board and handled properly than something that was sitting on ice, maybe out in the sun and then showing up in the store five or six days old. Frozen at sea is probably the best product you can get.

I tend to put just a little garlic and pepper on the salmon and the
n I’ll grill it. I have a grill that has some smoked chips so I can actually smoke it as well. It’s not good in my opinion to put salt or lemon on it until you’re actually ready to serve it. The surface will look nicer if you don’t put salt on at first.

If I have a choice, I’m going to pick steelhead or sockeye. Those are my two favorites. I just like the flavor of steelhead and sockeye, and sockeye is always the nicest red color. All the Pacific salmon are nice. Even the lowly pink and chum salmon are great in certain preparations, particularly smoked, and pink is a great fried product for fish and chips, things like that. 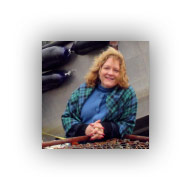