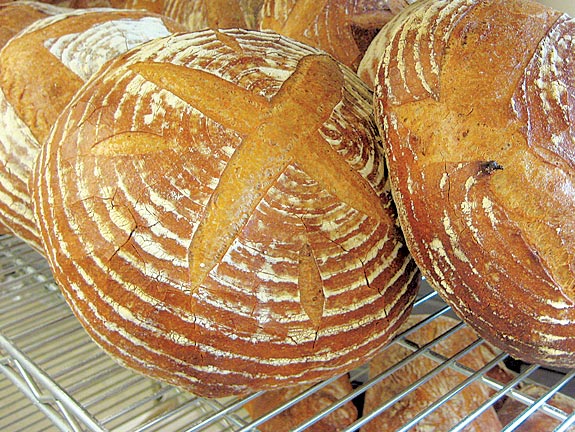 Thousands of years after people turned a wild seed into a cultivated grain, the fundamental process of raising wheat and fashioning it into bread is being reassessed. The elements remain the same: flour, water, leavening, and heat and voilà, a seed’s fuel reserve is now a lofty festival of texture and flavor. But wheat’s path to the table — from growing to milling to the chemical symphony of kneading and baking — is now being subjected to the craftsmanship of its fermented brethren, wine, cheese, and beer. Even the word terroir can be heard as growers, millers, and bakers apply ancient techniques and modern science to locally nurtured wheat varieties and breads.

DePasquale himself noticed this when he tried bread made from Bauermeister, a hard red wheat bred by Stephen Jones, director of the WSU Mount Vernon Research and Extension Center and leader of its western Washington small grains breeding program.

“I was knocked out,” DePasquale recalled late this summer at the Kneading Conference West, the West Coast version of the nationally recognized bread workshop started five years ago in Skowhegan, Maine. One variety in particular, said DePasquale, was “literally the best flour I’ve ever tasted.”

His notes are fit for a review in Wheat Spectator, if such a magazine existed : “Nice controlled acid flavors. Strong hit of spice, strong hit of chocolate. Very easy to work with, very nice flavor, good crumb color, a little tricky in the oven but well worth it.”

For the longest time, virtually all wheat was local. As recently as 1919, nearly every state had at least 1,000 acres or more in wheat production, plus local mills to process the harvest. Ebey’s Prairie, on Whidbey Island, grew a world-record 119 bushels of wheat per acre, says Jones. But over time, wheat production disappeared from western Washington. Fueled by federal commodity programs and industrialized baking, it concentrated in a handful of states.

Now wheat is among the local foods consumers seek out as they try to focus on their local economies and the fossil fuels consumed in shipping food long distances. Farmers are growing wheat for nearby markets and to break up weed and disease cycles. Among them: Nash Huber, who has tested dozens of varieties for Jones on his Dungeness Valley farm outside Sequim.

“Wheat gets you in your gut,” says Huber. “It’s an energy storage mechanism that we’ve had a relationship with for at least 10,000 years. It’s kind of like watching a campfire burn at night and getting the same feeling. It’s part of what makes us who we are.”

The artisan bread movement is a mix of past and future. Many techniques — long rising times, sourdough starters, hand-formed loaves — go back centuries. But now they are fueled by an intense knowledge of bread’s molecular-level transformations: the interplay of sugars, enzymes, and other proteins, the structural contributions of starch and gluten, the physical change from solid to liquid, foam to sponge, and chemical changes like caramelization and the Maillard reaction, which makes proteins and sugars take on what Andrew Ross, an Oregon State University cereal chemist, calls “the roasty, toasty notes” of meats and coffee.

Add to that a growing awareness of how local climate, like the mild, wet climate of western Washington, can affect the wheat that so thrilled DePasquale.

For aficionados like Richard White of Forest Grove, Oregon, wheat can even be as local as the backyard tomato. He started growing it four years ago, broadcasting some Red Fife from his food co-op and harvesting about ten pounds. This year, he planted Maris Widgeon, a British variety often raised for its thatch. He threshed it in a bucket, using a hand drill equipped with a paint stirrer and chain, then winnowed it by pouring the bucket out in front of a large fan.

The result was an earthy, open-holed round loaf that would look at home in ovens across the ages.

Carving thick slices from a loaf during a Kneading Conference goat cheese tasting, White said it gave him “the feeling of ownership, the feeling that I know where it came from, the feeling that you’re growing something besides grass. The taste is exquisite, even more exquisite because I made it.”