It’s not easy being a honey bee.

A mite with the last name of “destructor” routinely sucks its blood. A fungus augers into its gut, compromising its immune system and robbing it of nutrients. There’s a lot of time on the road—a California almond grove one week, a Washington apple farm the next—and the diet can be monotonous and not the most nutritious.

Then there are the living conditions. Recent work at Washington State University found hives tainted by more than five dozen different pesticides.

It’s all a bit much, say WSU researchers giving special attention to the mysterious Colony Collapse Disorder that has been hammering hives in recent years. While the disorder is having the impact of a flu epidemic, the WSU work strongly suggests it stems from several causes that, in concert, are making the tough life of a bee that much tougher.

“There are so many stresses on the bee, being raised in brood combs with high levels of pesticide residues adds just one more thing,” says Steve Sheppard, a WSU entomologist.

He quickly adds that the disorder is hard on the beekeepers, too. In each of the last three years, beekeepers across the country have lost one-fourth to one-third of their colonies, according to the Apiary Inspectors of America and the U.S. Department of Agriculture. Many of these losses are being blamed on Colony Collapse Disorder.

Jerry Tate, president of the Washington State Beekeepers Association and a Spokane honey producer, says some hobby beekeepers have had 50 to 80 percent losses. Several commercial operations, which help pollinate many of the state’s top crops, have lost as much as 50 percent a year.

Yakima’s Eric Olson, one of the largest beekeepers in the Northwest, has been hit repeatedly. He suspected more trouble was on its way last August when his western Washington hives, one of three sets he keeps in various locations, started to struggle. He supplemented the bees’ diet with syrup and pollen, and they eagerly processed what he gave them. Then, on November 1, he found their hives completely empty, an apian version of colonial Roanoke Island.

The laboratory now has five people working on colony health. They include Matthew Smart and Judy Wu, two master’s students who came to WSU knowing basically nothing about bees. Now they approach being a modest power couple of Northwest bee research.

“These kids are superstars,” says Olson. “The entire industry is captivated by the work they’re doing.”

Smart has focused on Nosema ceranae, a relatively new and little known fungus. With repeated sampling and DNA analysis, he determined that the fungus has become more common than its more widely known cousin, Nosema apis. Smart says the fungus has been shown to suppress a bee’s immune system, draining its energy and reducing the number of bees returning to the hive.

“It’s possible that a lot of these bees are dying because they’re just not able to get enough nutrients in their diet,” Smart says.

But it’s not a smoking gun.

“Instead of looking for one single factor causing colonies to collapse, it’s more important now to be looking at interactions of these factors,” Smart says. His thinking is underscored by research in the peer-reviewed online journal PLoS ONE suggesting the colony collapse involves as many as 61 possible variables.

Among them are pesticide levels. Wu tested brood combs, the breeding quarters of the hive, and found they contained 66 different pesticides. Most were insecticides, more than three-fourths of which are toxic to bees. But the less-than-toxic pesticides concern her as well.

Regulators focus on how much chemical it takes to kill a bee and test one chemical at a time, says Wu. But they do not look at the combined effects of chemicals, which can be 10, 100, even close to 1,000 times more toxic. The chemicals also affect a bee’s nervous system, behavior and larval development.

The impact can ripple through a colony. A tainted forager can contaminate the hive with pesticides, which can reduce the number of eggs laid by the queen and impair workers’ memory and spatial orientation. If a poisoned adult dies, younger bees can be forced to serve as foragers, leaving fewer bees to tend to the brood, perform household tasks and process food for the winter.

In one test, Wu found that a contaminated hive delayed larval development, giving the blood-sucking mite Varroa destructor more time to produce offspring in the hive.

“We’re continuing to run out of safe chemical control measures for this mite, which has a very rapid life cycle. Due to the high rate of reproduction, mites can quickly develop resistance to pesticides,” says Sheppard. “The long term answer will come through genetic improvement of the bees. And in the meantime, beekeepers need to use whatever control measures they’re using as judiciously as possible.”

For now, the lab is recommending that beekeepers change their combs more regularly to reduce the pesticide load. It’s not a perfect solution, costing beekeepers money and bees a fair amount of energy. Ultimately, the researchers hope to guide solutions that will make things easier on the bees and tougher on the pests that plague them. 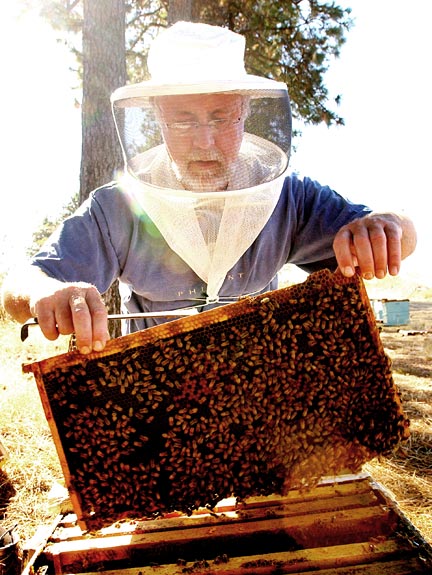