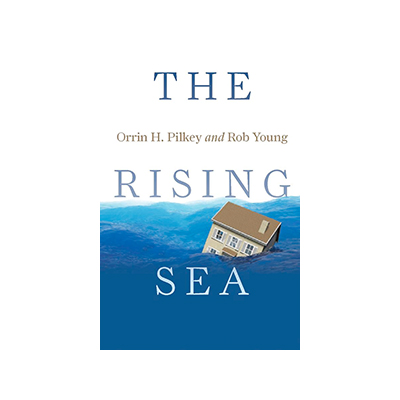 The island nations of Tuvalu and the Maldives, the Inupiat Eskimo village of Shishmaref, and Soldado Island off the Colombian coast might be tough to find on a geography quiz. But all of these locations foretell a future of oceans overwhelming coastlines. In each of these remote places, residents are either moving or preparing to move to higher ground before their homes get swallowed by the sea. Far more famous Venice also feels the threat of rising waters, along with sinking land. Iconic St. Mark’s Square was flooded seven times in 1900; today, the square is underwater about a third of the time.

Using examples like these from around the globe, Orrin H. Pilkey (’57 Geology) and Rob Young lay out the facts about increasing sea levels, the probable causes, and the consequences of inaction. Their stance—that the oceans are rising and will inevitably continue to—is bolstered by scientific field data, while acknowledging the unpredictability and limitations in current understanding of sea levels. They don’t rely on mathematical modeling or generalities. In The Rising Sea the authors strongly insist that the many varieties of coastline will be impacted differently by rising waterlines.

However, most coasts will be impacted, and severely. Pilkey and Young have harsh words for deniers of climate change and sea level rise who claim the increase will either not occur or happen in tiny increments. The rapidly melting ice sheets in Greenland and Antarctica, write the authors, “are truly the 800-pound gorillas in the room of global climate change.” With the ice sheets’ contributions, they claim sea levels could realistically rise seven feet by 2100—three feet in the best case scenario.

Such a catastrophic rise in the sea level would displace millions of people, destroy billions of dollars in property, and require massive evacuations. Outside of the human cost, vital ecosystems around the world, from mangrove forests to salt marshes and coral reefs, would face massive erosion.

Pilkey and Young’s primary solution is simple: move on back. They feel like the engineering solutions of levees, expanded beaches, even restoring wetlands in some areas, will not stave off the oceans creeping inland. As an example, Katrina’s devastation of New Orleans showed the failure of levees.

Instead, the authors call for governments to restrict oceanfront development where rising sea levels could threaten homes and infrastructure and to plan a strategic retreat where necessary. Without an orderly plan and stronger public policy, the amount of money and trouble will rise along with the level of the ocean.