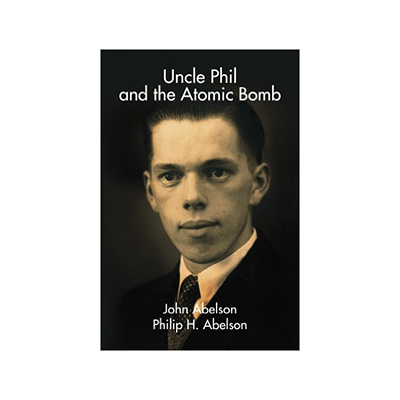 I was lucky enough to meet Philip Abelson in 2002 on the occasion of his visit to Pullman for the dedication of Abelson Hall (formerly Science Hall) in honor of the scientist and his wife Dr. Neva Abelson ’34.

During our brief interview, Abelson downplayed his own story, instead emphasizing his family’s ties to Washington State University. In 1905, his parents Ellen and Olaf, young newlyweds and both immigrants, moved to Pullman where they built a home and attended college. They left for Tacoma before Abelson was born, but their ties to the town continued when he and his older brother Harold came to Washington State College in 1930.

What Philip Abelson glossed over in telling me his story — and the focus of the book — was his valuable work toward purifying uranium 235. The purification process, which he refined at the U.S. Naval Research Laboratory during World War II, helped Robert Oppenheimer and his team progress on the Manhattan Project and develop the atomic bomb.

The book is told in Abelson’s voice with the help of his nephew John Abelson ’60. The book is lively with details, like the early argument his parents had about his name — his father liked “Felix,” which was Latin for happy, while his mother preferred a more staid “Philip.” She thought she had won that argument until 1941 when a trip to the courthouse to pick up a copy of Philip’s birth certificate revealed that his name had never been changed.

Philip came to WSC during the Great Depression. Here he was somewhat insulated from the “big city slums” and economic hardships that his parents back in Tacoma were seeing firsthand. After college, Philip took off on a five-week tour of the country, riding the rails with hobos, going all the way to Chicago and then returning home through the Dust Bowl and Los Angeles, dodging railroad detectives, being caught by the train police with only 75 cents in his pocket. He hitched a ride to Sacramento, caught a train to Pasco, and finished his tour back to Pullman, where he learned he had earned a teaching assistantship in physics. “I saw quite a bit of life in the raw during the time of the Great Depression… the only cruelty and meanness that I met with on my trip was on the part of petty officials,” he wrote. “After one comes through such an experience, other tight situations do not cause one to lose his cool.”

It was outside the chemistry building on campus that he first saw Neva and was taken. “She walked erect with a brisk and purposeful stride and she was smiling.” Too little time in the book is spent on how the two great intellects found friendship and love, perhaps because many of the details in Uncle Phil came from Abelson’s brief autobiography, which Neva edited and typed.

Back in Pullman, Philip had his first taste of nuclear physics in the lab and classrooms of WSU professors Paul Anderson and S. Towne Stephenson. That led him to a post at University of California at Berkeley where he worked in Ernest Lawrence’s lab on the cyclotron. Around that time Neva had been accepted to medical school in San Francisco, just across the bay. It wasn’t long before the two were married. After Philip completed his PhD at Berkeley, they moved back east for work, and for Neva to continue her medical studies at Johns Hopkins.

As the book moves into Abelson’s physics and chemistry work as a scientist at the Carnegie Institution of Washington and the Naval Research Laboratory, his nephew interlaces Abelson’s breakthroughs with the groundbreaking nuclear research taking place around the country at places like Oak Ridge, Hanford, and Los Alamos. Ultimately Abelson and his team ended up at Oak Ridge to set up the liquid thermal diffusion plant to make purified uranium. He was in his early 30s.

After the war, Abelson had many other professional successes. He focused on biology, then geology, then went on to serve as editor of Science. He was also president of the Carnegie Institution from 1971 to 1978.

Neva died in 2000; Philip followed four years later. They were a remarkable couple.