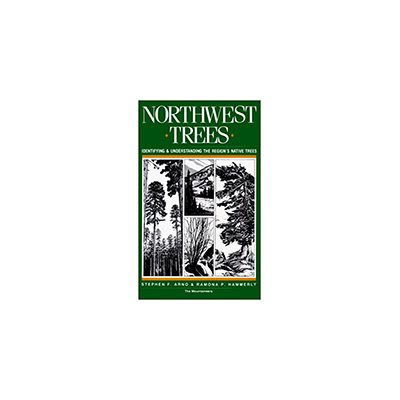 Trees recall memories. Both thicken through the years, become storm-roughened, and may persist despite broken branches. We look at trees the way we look to memories as familiar waymarks in our personal landscapes. The new edition of Stephen Arno (’65 Forestry) and Ramona Hammerly’s Northwest Trees offers to enlarge one’s landscape of trees. The beauty of this book, with its insights and plucky facts, welcomes familiarity with trees. Reading Northwest Trees turns trees into sharper memories.

This new volume—characterized as an “anniversary edition”—extends the material of the first edition by providing more information on the ecology of Northwest trees and, especially, how our changing environment, with its altered climate, shifting regimes of fire, and new pathogens, creates challenges for sustaining species and forests. The new edition includes trees of southern Oregon and the Rocky Mountains of the inland Northwest that were not included in the first edition. The authors have also remodeled their identification keys, turning them into vertical flow charts that are easily followed along branches that offer brief descriptive features accompanied by simple illustrations. These are identification keys that a ten-year old could manage and an older adult could marvel at for their simple elegance. Beyond the identification keys, the book describes the various species of conifer and “broad-leaved” trees that inhabit the Northwest, providing information on the appearance, location, ecology, and human history of use for more than 40 kinds of trees.

This is a two-hearted book, and Arno’s descriptions of the trees are one of its hearts. The text is vivid and places one in the woods. As I read, I wanted to walk, to feel bark, to slide leaves between my thumb and forefinger, and to feel the weight of seeds in the palm of my hands in order to experience Arno’s stories. He tells us how to recognize the large stumps of ponderosa pine logged decades ago by their light color at the core of the wood and smell “of fresh pitch when carved with a knife.” Arno tells how the shade-intolerant ponderosa pine became one of the most widespread species of the American West, and how timber atolls form on the high slopes of northwestern mountains. He tells the story of how whitebark pine, a keystone species that both sustains and stabilizes its ecosystem through roles in hydrology and the food chain, has been changed by pathogens and predators; the future of whitebark pine faces severe limits because of the suppression of fires. Among the stories are tales of botanical exploration and technological opportunities in the relative strengths of woods. And there is beauty in stories like that of thinleaf alder, whose bark was used by early peoples of the Northwest to obtain a red dye which could strongly color one’s hair without a mordant because of its tannins.

Arno’s equanimity makes room for stories of both logging glory and the successes of sound environmental policies. As I read through these biographies of trees, however, it was impossible not to see a story of ecological dilemmas. Aggressive logging practices altered the flow of water, nutrients, and energy in ecosystems, disabling in decades ecological interrelationships and forest communities that had co-evolved for tens of thousands of years. These disturbed forests provided openings for invasions of fungal pathogens and insect predators that have further altered the life histories of tree species and opportunities for the survival of woods. We walk today in northwestern forests that are heavily human-managed for fire, wildlife, and often even for the planting of the trees themselves. The necessity of human-management for biological systems as complex and poorly understood as forests reflects the severe problems that our ecosystems face, and is one reason why a book like Northwest Trees has immense value. Arno helps us to understand the attributes as well as the dilemmas of our trees in ways that will allow us to make better-informed evaluations of ever-changing management policies.

Northwest Trees is pleasantly reminiscent of Donald Culross Peattie’s Western Trees, which was first published in 1953. Peattie’s capsule biographies of the species of trees in the American West, although generally shorter and less ecologically informed than the essays in Northwest Trees, have provided the kind of foundation on which Arno has built successfully. Peattie’s Western Trees, like some of his other books on natural history, was illustrated with exquisite woodblock prints made by the artist Paul Landacre. The Landacre prints of leafy branches and plant communities are exceptional compositions but give a more artful, than figurative, representation of the trees that Peattie describes. The Landacre artwork of Western Trees is echoed in a set of beautiful illustrations in Northwest Trees by the artist Ramona Hammerly.

Hammerly’s artwork is the second heart of Northwest Trees. As with Landacre’s illustrations in Western Trees, Hammerly’s art draws one through the pages of Northwest Trees with utmost visual pleasure. Some of her images, particularly those of cone-bearing branches, have the precision of scientific illustration, allowing one to better understand the characters of trees that are described in the text. Her drawings of trees and communities similarly help to convey Arno’s descriptions. For example, where Arno writes of the “narrow cathedral spires that adorn high-country parklands” to describe subalpine firs, we have that sense and more in Hammerly’s art. Her image of a limber pine transports me to a particular rocky promontory where I have often sat beneath these trees. Illustrations of leafless limbs silhouetted against sky, the sweep of branches in a tan oak thicket, or the outline of small sitka spruce on seastacks among many others provide emotive bridges to the places of trees.

This anniversary edition is a welcome companion to the first edition of Northwest Trees. Its greater inclusiveness, in terms of both the geographical area it covers and the number of species it describes, and its extensively revised text—including, especially, a considerable amount of new information on the ecology of Northwest trees—make this revised edition substantially different from the first. All of this, together with its abundant stories and evocative illustrations, makes Northwest Trees a pleasure to read.