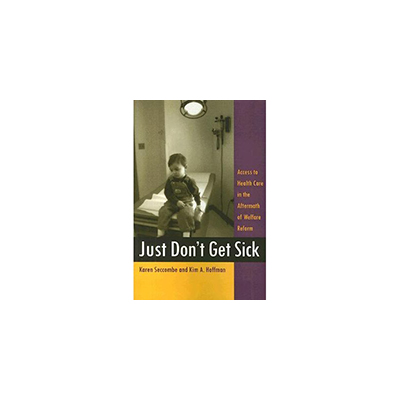 Victor Sidel, the co-founder of Physicians for Social Responsibility, observes, “statistics are people with the tears washed away.” Just Don’t Get Sick, a new book by Karen Seccombe (’85 Ph.D. Soc.) and Kim Hoffman, offers a litany of statistics about the plight of Oregon families who formerly received welfare benefits, but the tears glisten on these pages, thanks to skillful threading of the individual stories and observations of the study subjects. It’s a compelling and often gut-wrenching analysis of the frayed social safety net in 21st-century America.

In 1996, promising to “end welfare as we know it,” President Bill Clinton signed the bipartisan (and Orwellian-titled) Personal Responsibility and Work Opportunity Reconciliation Act (P.L. 104-193). The legislation set a lifetime limit on welfare payments, along with new vocational training services and limited childcare assistance. The effect was immediate and dramatic. Over the following decade, caseloads for the Temporary Assistance for Needy Families (TANF) program dropped by 60 percent—and Democrats and Republicans clamored to take credit for the millions of former welfare recipients who had entered or returned to the workforce.

There was an important, but largely unrecognized consequence of this policy—former welfare recipients entered the voluntary employer-based insurance system, which was already staggering under decades of double-digit cost increases. Many low-wage employers, particularly those in the service and agriculture sectors, simply do not offer health insurance. Other employers do provide health insurance, at least for the worker, but the premium costs are high and the coverage often limited.

Under welfare reform, TANF beneficiaries who were returning to work received a year of transitional health benefits through their state Medicaid programs. At the end of this period, children might still be eligible for benefits through the State Children’s Health Insurance Program (SCHIP), but their parents typically were not. Many simply fell through the cracks, losing coverage altogether. Seccombe and Hoffman follow 500 Oregon families through this transition, and document the often sad and maddening health consequences.

This book shows multimethod research at its best—summary health statistics are matched with insightful and compassionate commentary, and peppered with quotes from face-to-face interviews. The approach brings new life to well known problems in the health system—the financial repercussions of catastrophic medical bills, the bewildering mass of insurance paperwork, the prohibitively costly prescription drugs, the missed doctors appointments, the penny-wise but pound-foolish use of hospital emergency departments. More fundamentally, it describes the complex relationship between social class, employment, disease, and disability.

The final chapter, titled “Facing Reality,” provides a synopsis of some of the main policy alternatives for addressing the health insurance gap in welfare reform. In many ways, Oregon’s Medicaid program, Oregon Health Plan (OHP), is a model for responsive public insurance, with relatively generous income eligibility requirements and a subsidized “buy-in” option. The fact that this program is unable to shield former welfare recipients highlights the limits of state solutions. Federal reforms options, up to and including a single payer system, appear to offer the best hope for this population and the much larger population of uninsured and underinsured Americans.