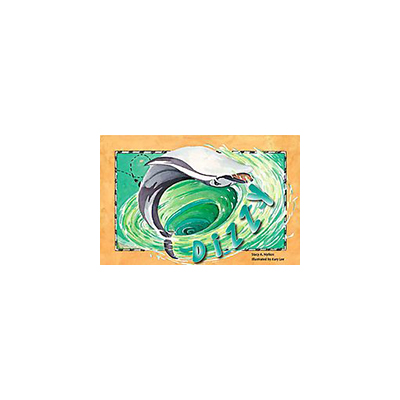 Meet Dizzy, a Pacific white-sided dolphin who romps through the pages of this book at a—well, at a dizzying pace. Aimed at a readership of 3- to 8-year-olds, the story, such as it is, follows Dizzy through days spent flying among the clouds, high-diving, and “porpoising” frenetically about his watery world. But then he catches sight of a sea lion, a “fish shepherd” who herds sardines and hake, and realizes: “Am I missing fresh fish? . . . But that’s just not right!” After wearing himself out trying to find the fish shepherd again, Dizzy begins to take note of the world around him—other creatures, the sun, the clouds—and comes to understand that he’s been missing out on a lot more than fresh fish. “There’s so much to see,” he says, “and I never knew.”

The illustrations by Kary Lee ’86—as exuberant and page-filling as Nyikos’s narrative is minimal—give shape and substance to the book. From the wrap-around cover image, which combines an aerial view of Dizzy’s erratic course around a Pacific-coast inlet with a rendering of the dolphin executing a back flip over an enormous whirlpool, to the book’s closing image—a two-page spread of Dizzy’s tailfins disappearing into the brine as he takes off in answer to the “call of the water”—the illustrations work seamlessly with the text to create a celebration of the lives of all the Dizzys of the world.

The book concludes with a postscript titled, “Dolphin Delights,” which helps young readers place Dizzy and his kin in the real world. Here Nyikos provides information about Pacific white-sided dolphins and related species, their habitat, diet, playfulness, methods of communication, predators, and more.