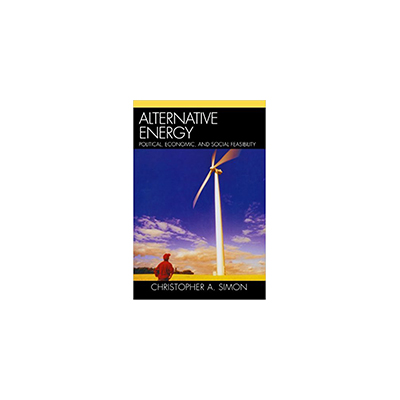 Readers wishing to stay current on one of today’s most important public policy issues—the transition from fossil fuels to alternative energies—would do well to pick up a copy of Alternative Energy: Political, Economic, and Social Feasibility by University of Nevada-Reno political science professor, Christopher A. Simon (’94 M.A., ’97 Ph.D.).

In this sophisticated, insightful, and well written book on the current global push to adopt varying forms of alternative energy, from wind to solar, geothermal, hydrogen, and beyond, Simon successfully meets his goal of “outlining the information needed by individuals [interested in] participating in the development of a sustainable community.” Along the way he provides a compelling answer to a key question: why pursue alternative energy and fuels, and why now?

His comprehensive answer ranges across a number of key reasons, including a cultural shift to a more environmentally aware and sensitive society, the emergence of new political players such as well organized and well funded environmental advocacy groups, the growth and dispersion of information highlighting the growing gaps between energy demand and available supply, critical changes in America’s primary political institutions and policies over the past 40 years, the advent of a truly globalized economy, and the role of conflicts such as the Iraq war and the location of so many key oil reserves in unstable regions of the world (e.g., Middle East, Russia).

What makes the analysis even more interesting is that Simon then tackles another critical question in the debate over alternative energy that focuses on “feasibility.” Yet it is not just the economists’ version of feasibility—costs and benefits—that he cares about; rather, he explores the full range of feasibility, political and social, as well as economic. And while Simon is reasonably optimistic that the train known as alternative energy has left the station with a good head of steam this time and therefore is certainly more than a fad of the moment, he covers his bases by reminding readers that he is well aware of past alternative energy booms and busts—oil shale in the 1970s, anyone?

Finally, Professor Simon adds two more items readers will find of value. First he does a terrific job marshaling and effectively presenting tremendous amounts of data related to energy use, energy supplies, and relevant U.S. energy policies and their origins. Second, in the final chapter, he walks readers through HOMER, the Hybrid Optimization Model for Electric Renewables software “tool” that he envisions people employing in their quest to more effectively deal with alternative energy choices and, in the most optimistic scenarios, assist in their efforts to build and maintain sustainable communities.

The disappointments in Alternative Energy are few, yet notable. Of particular interest is the fact that climate change as a key forcing agent for the push toward alternative fuels/energy does not even make an appearance in this book. This oversight is accompanied by the fact that Simon recognizes only the “peak oil” side of the ongoing debate over oil supplies. Yet any discussion of energy policy that excludes the opposing viewpoint, perhaps best represented by Daniel Yergin and his allies, raises the question of a biased reading of the global oil situation, and hence likely overestimates the potential for crisis in the next few decades. The fact that this important debate is not reported fails the reader in an important way, precisely because the “Yergin view” is gospel to many of the world’s most important oil policymakers, whether Saudi Arabia’s ruling family, or President Bush and Dick Cheney, among many others (or even many petroleum engineers and energy experts).

That said, this is a terrific advancement on the current literature on energy policy and is well worth the read.