There was once a small, plump, good-natured lady who lived in a great old house with a cantankerous husband named Harold. She was about the best mate a man could have and he was about the worst mate anything could have.

The lady, whose name was Emma, had a peculiar habit, however, and that was that she never threw anything away. Her closets bulged with heaps of clothes and stacks of magazines and balls of string and boxes of buttons— in short, just about anything that had ever entered into the life of Emma was still there someplace, boxed or bundled up in the great old house.

Now this eccentricity grated on Harold’s nerves like a rasp on glass, so he used it as a convenient excuse to take up with a platinum blonde who bought peroxide at his drug store. The friendship flourished into an affair, and soon Harold was away on business trips almost every week end. In fact business became so good that he was often called away in the middle of the week, and his wife Emma began to think she had married a traveling salesman instead of a druggist.

But she was good naturedly innocent and never suspected anything amiss. She spent her lonely evenings boxing and bundling up the things that had come into her daily life, and chatted happily with her beloved pets—a scotty dog named Erp, a cat, a canary and seven goldfish, with no names whatsoever. 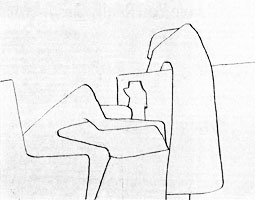 Harold was a simple man by nature, and after awhile he decided that his modern way of life was setting too fast a pace for him and had become too complicated. One of his women was going to have to go, and it wasn’t going to be the blonde, even though she couldn’t cook.

He didn’t want to kill Emma. This wasn’t because he was sentimental but rather because he was squeamish and had a weak stomach. Besides, he had long toyed with the idea of whether or not it was possible to drive a person into insanity. If anyone could do it, Harold was sure he could.

He laid his strategy well. Emma had quite a little money which, naturally, she kept, and Harold wanted to be sure that the money would be placed under his supervision when Emma went off the deep end. He would need the extra cash for two fares to Bermuda.

Harold started off his project by instilling in Emma’s mind doubts about herself. She wouldn’t be able to find one of her shoes; it would turn up in a pan with a lid on it inside the oven. He hooked a special switch into the electric wiring so that he could control the light in the room. She would turn off the light, go to sleep and when she would awake in the night the lights would be on.

Harold had half a dozen such plots and devices going simultaneously and continuously. But about the only effect his scheme had on Emma was that her saving instinct had taken on a new intensity. She had actually begun to save the scraps of food from the dinner table, sealing them up tight in quart jars. Now although this should have been an encouraging sign, the more she saved the more pleasant and calm she became.

Harold knew that if his plan were to succeed within a reasonable amount of time he would have to deal a shattering blow to his wife’s joviality.

This brought about the weird incident with the dog Erp.

Harold brought home some arsenic powder one evening and stored it in the medicine cabinet. The next morning Erp ate breakfast in his usual hurried fashion, rolled over on his back and passed away. Emma was stricken with sadness at the loss of her pet. No longer was the light of joy in her eyes, and she sat in her chair in the great old house—the dark and dusty and crammed-full house—and rocked the dead dog Erp back and forth, back and forth in the living room.

Harold smiled to himself as he went out the door for a three-day trip, but it was an uneasy smile that hung faint and timid in his mind.

Returning home, he stepped nonchalantly into the living room, and leaped half way to the top of a stack of old catalogs, sending a box of empty ink bottle clattering to the floor.

“What in the hell is that?” he screamed at his wife.

“Erp,” he yelled, the hair lifting on his neck.

It took Harold several days to grow accustomed to the glassy and accusing stare of Erp, but he knew he must hurry if he were to take advantage of his wife’s low spirits, which had already picked up remarkably, and were in fact almost back to their normal jovial state.

It was the cat’s turn next to play its role in Harold’s little drama. The cat ate its breakfast, looked disturbed and died. Harold went off on a trip. When he came back, he didn’t flick an eyelash at the cat curled, rather stiffly, in its usual place in front of the hearth. But an almost imperceptible chill, like an ant with cold feet, crawled up his back.

Next came the canary. One day it was dead, the next it was back in its cage, swaying back and forth still and silent on its perch. And worst of all, the death of the bird seemed to have absolutely no effect on Emma.

The stuffed menagerie, however, was beginning to make Harold highly nervous, and he felt a powerful urge for haste in his weird task, and a yearning for lighted and distant places where people kept absolutely nothing at all.

And then it happened. The goldfish were waiting belly up in their bowl one morning when Harold came down for breakfast, and this was strange indeed. He hadn’t poisoned the goldfish!

While he sipped his coffee and contemplated his turn of events, Emma bustled briskly here and there about the kitchen. She scooped the goldfish from the bowl with a tea strainer and hurried across the room to a cabinet, which was stacked with the usual conglomeration of bottles, glasses and vats, most of which contained some preserved and cherished perishable that had entered into the life of Emma.

“What in hell do you think you’re doing?” he said in his usual dull and acid voice. He sipped his coffee.

“Pickling my goldfish,” she said happily.

“Yes,” she said, “pickling my goldfish. It would be so terribly sad to have them buried in the ground and to never see them again, never never again, until the world stops and all is lost forever.”

Harold looked at Emma keenly. Could it really be? He poured another cup of coffee, which tasted terrible this morning, but he hardly noticed. Could it really be that all this time his wife had actually been insane and he hadn’t known it? She had been off her rocker all along? Why it was so obvious now! No sane person would keep things the way she did. He watched her hurry to the other side of the room, and he smiled. Perhaps he would start proceedings for her commitment to an asylum that very morning. Well, maybe he would wait until the afternoon because he really wasn’t feeling too well.

He sipped his coffee. Emma was going briskly about her task across the room. She had finished pickling the fish. He watched her, and forced himself to smile, despite the hot glow in his stomach. Bermuda, he thought. I’ll leave tomorrow. His neck felt rather stiff this morning and the hot Bermuda sun would be good for it. He sipped his coffee, but his hand shook and he sloshed the coffee on the table. Harold stopped smiling and he wondered how long it would take for the world to end, and what would become of all the long lost things in the world when the end came. And he slid forward on to the table now, and thought solemnly about the dog Erp, the cat and the canary and the seven goldfish. Emma was just a fuzzy silhouette bustling about her task across the room. She worked briskly, happily, humming some queer little tune. Harold watched and waited.