One of the most popular naturally leavened breads of late is the country loaf developed by Tartine Bakery chef Chad Robertson. Its precise measurement and multiple steps can be off-putting at first, but over time you’ll find you can go through many of the motions as a matter of routine.

Robertson and other artisan bakers also recommend a variety of tools to maximize the odds of success. You can get an infrared thermometer, a special mixing tub, a kitchen scale, and special baskets lined with flax linen. You can even go all out with a home grain mill and wood fired oven.

Or not. Either way, you’ll want to go through these motions. 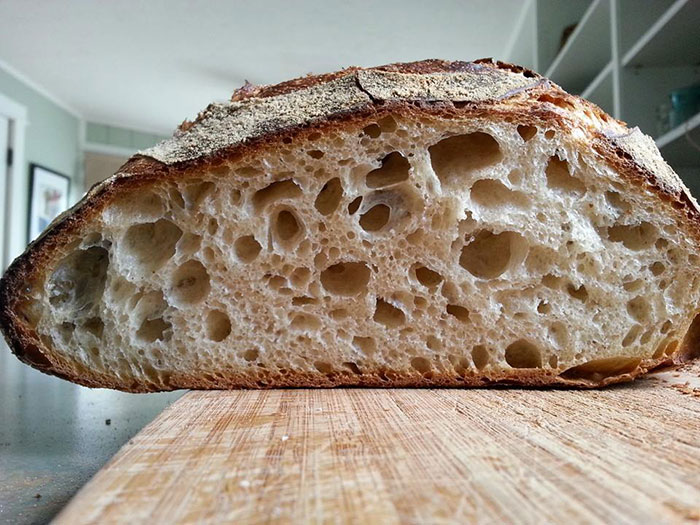 First, you’ll need starter, a batter-like mix of water, flour, and living yeast and bacteria cultures. The easiest way to get this is to ask a bread-baking friend for some. Bakers routinely throw starter out while refreshing it, so there’s plenty to spare. You can also order starter from the likes of King Arthur Flour.

To make it yourself, mix a cup of bread flour and enough lukewarm water to make a thick, lump-free batter. If you have a thermometer, aim for water that is 78 degrees F. Cover it with a kitchen towel and let it rest for two days in a cool, dark place. You should see bubbles form around the sides. Remove about a quarter cup, tossing the rest, and mix it with half a cup of flour and enough water to make a batter. You’ve now refreshed the blend, supplying food and water for the microscopic living things that will eventually produce gases and flavor for your bread.

Repeat this process every 24 hours for two to three weeks. Be patient. When it rises and falls predictably, you’ll have a lively, active starter that can be used to make a leaven, an intermediate stage between starter and dough.

The night before you plan to make dough, remove one tablespoon of starter. Dissolve it in one cup of lukewarm water and add nearly two cups of flour. If you have a kitchen scale, use 200 grams of water and 200 grams of flour.

You should see a good crop of bubbles from this mixture in about ten hours, even sooner if you proof in an oven warmed to between 78 and 82 degrees F. Drop a spoonful in room-temperature water to test it. If it floats, it’s ready.

Transfer the mix to a big container and let it rise, covered, at 78 to 82 degrees. An oven with a light on can work well as a proofing chamber, but post a reminder to keep yourself from turning the oven on. After half an hour, gently lift the dough and fold it back itself four or five times, rotating the dough on each turn. Do this every half hour for two to three hours. Jonathan Bethony, the WSU Bread Lab baker, demonstrates the technique here.

The dough should grow by about 30 percent and have a few large bubbles. Turn it on to a floured countertop, divide it in half, and fold and shape two round loaves. Let them rest covered for half an hour.

Give the loaves some final shaping and place them on parchment-lined plates. Dust the tops with flour and cover with plastic wrap.

At this point you can either let them rise three to four hours at 75 to 80 degrees or place them in a refrigerator for eight to 16 hours.

To bake, place a cast-iron pot and lid in an oven and preheat at 500 degrees for at least half an hour. Slash the top of a loaf with scissors or a razor blade, lower it into the pot, and bake covered at 475 degrees for 30 minutes. Remove the cover and bake 15 to 20 minutes more at 450 degrees, or until the loaf is a dark brown.

Remove the loaf and let cool on a wire rack for at least half an hour before slicing. Repeat the process for the second loaf.

Keep the bread with the crumb side down on your cutting board. Store it under a dish towel, in a paper bag, or in a bread box. Don’t wrap it in plastic.

The bread’s natural acidity will help it keep for several days. Start out eating bread. As it gets older, make toast, then French toast, bread pudding, and finally, croutons. It rarely lasts long enough to get to the crouton stage.