Cranberries complement more than turkey. But this time of year, it’s easy to forget that fact.

In this recipe from Linda Burner Augustine (’83 Home Econ., Honors), cranberry sauce tops roasted pork loin infused with flavorful fennel, rosemary, and orange. The dish originally appeared on her A Year at the Table blog in December 2012.

Of course, you could always make the sauce for your Thanksgiving turkey, too.

Fresh rosemary, fennel seeds, and orange zest form a savory herb rub for this pork loin roast, and slivers of garlic randomly poked into the meat before it is roasted guarantee each slice is savory and flavorful.

I like pork loin roast because it’s an affordable alternative to beef and its mild flavor takes on the flavors of whatever you are seasoning it with. This recipe involves just a few ingredients to make the rub and a fresh cranberry sauce enhanced with currants, dried apricots, and a pinch of orange zest and rosemary to complement the pork roast rub.

If you’re not familiar with pork loin roast, it comes from the center of the pig so it’s more tender than other cuts, like the shoulder, that get lots of movement and have connective tissue. Connective tissue needs liquid and heat to break down for the meat to be tender. But not with the loin roast. Dry heat is all that is needed.

If you’re worried about how to tell when the pork is done, invest in an instant reading food thermometer. They are available at kitchen stores and many grocery stores. How they work is: by poking them into the center of a meat roast, they instantly register the interior temperature taking any guesswork out of testing for doneness.

For cooking pork safely, the official recommendation is an end temperature of at least 145 degrees with a 3-minute resting time. So I cook mine to 145 to 150 degrees, and let it rest several minutes under a piece of foil to keep it warm. Remember, the internal temperature will continue to rise as your meat “rests” under a piece of foil. Resting helps settle the juices in the meat so they don’t end up all over the cutting board when you slice it. I begin checking the internal temperature after about 45 minutes of cooking. Then I can estimate about how much more time it needs.

For the pork rub

For the cranberry sauce

For studding the pork with garlic, cut each clove into thin slivers. There should be about 12. Using the tip of a paring knife, make random pokes in the top and sides of the pork (pokes should be the length of the sliver of garlic); insert garlic all the way into slits.

Season pork all over with salt and pepper. Rub fennel rub on top and sides of pork. (Pork can be made ahead to this point and refrigerated several hours ahead before roasting. Remove pork from refrigerator 20 to 30 minutes before roasting).

Heat oven to 425 degrees. Place pork on a rack and set rack in a roasting pan or put pork directly in pan.

Roast pork for 15 minutes, then turn heat down to 325 degrees and roast until the internal temperature when measured at the thickest part is 145 to 150 degrees, about 1 hour. (Check internal temperature of pork after 45 minutes.) Remove pork from oven and cover loosely with foil, allowing it to rest.

Bring water and sugar to a boil in a saucepan and add cranberries; reduce heat to low and simmer until cranberries are opened and softened, about 10 minutes. (Sauce will thicken as it cools to room temperature.) Remove from heat and stir in currants, apricots, rosemary, and orange zest.

Betsy Rogers (’89 Comm.) owns and operates Ovens to Betsy, a personal chef business in Seattle. Here, she shares recipes for her mom’s cranberry-apple pie, a Thanksgiving staple at her table for as long as she can remember, and a spicy cranberry sauce (think habañero and scotch) to heat things up for the holidays. 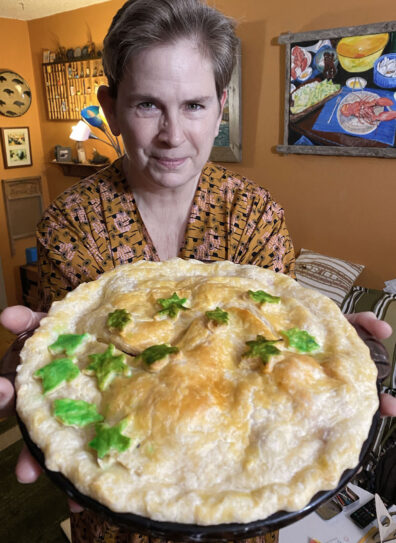 From Betsy Rogers of Ovens to Betsy

“I think fondly of this pie,” says Rogers, who doesn’t recall a Thanksgiving without it. “I’m sure we also probably had pumpkin.” But this is the one that stands out in her memory, the one she continues to make today. “I never knew anyone else who made a cranberry-apple pie. It was kind of our thing.”

Rogers always makes the crust from scratch, often using the Foolproof Pie Dough recipe from Cook’s Illustrated which calls for vodka as the secret ingredient. “Use your favorite,” she advises.

As for the filling, “I like whole cranberries,” she says. “You get that nice little burst of tartness with the sweetness from the apples. Braeburn and Golden Delicious hold up well. And you add a bit more sugar” than you would with a plain apple pie.

1 ¼ cups sugar, plus 1 tablespoon for top of crust

Crust for double crust pie (either store-bought or homemade)

Place a rimmed baking sheet on a lower middle rack and preheat oven to 425 degrees while preparing filling.

Peel, core, and slice apples (you should have roughly 6 cups). In a bowl, mix sugar, cornstarch, cinnamon and salt.  Add apples and cranberries and toss to coat. Place one disc of pie dough in a pan and add half of the fruit mixture, dotting with half of the butter. Add the rest of the fruit and dot with the remainder of the butter. Place the other pie disc on top and crimp the edges.  Brush the egg white on top and sprinkle with 1 tablespoon of sugar. Cover edges with foil.

Transfer pie to baking sheet and bake for 20 minutes. Reduce temperature to 375 degrees and continue baking until deep golden brown, approximately 25 minutes longer. (Remove foil for final 10 minutes). Remove to a cooling rack and allow to cool at room temperature before serving.

From Betsy Rogers of Ovens to Betsy

Rogers finishes this sauce with a splash of scotch. “You don’t use a lot,” she says. “But it just provides this smokiness, and it’s kind of fun and updated. Sometimes, you eat something, and there’s just that little something that makes you say, ‘What is that?’ This is that.”

The recipe was adapted from Serious Eats, which used lime, jalapeños, and mezcal. “I thought, ‘Ooooh, let’s make that even spicier,” says Rogers, who subs orange for lime. “Cranberry-orange is just a great combination.”

1 tablespoon smoky scotch or whiskey (such as Lagavulin, Laphroaig, or Ghost Dog)

Combine cranberries, sugar, water, orange juice and zest, habañero, and salt in a medium sauce pan. Bring to a boil over medium-high heat. Cook, stirring occasionally, for 5-6 minutes, or until berries begin to pop. Press berries against the side of the pan and continue cooking until sauce begins to thicken, about 6 minutes longer. Remove from heat and stir in scotch or whiskey.

Bring water, sugar, salt, zest, and juice to a boil. Add cranberries and bring back to a boil. Reduce to medium heat and cook, stirring occasionally, for approximately 10 to 15 minutes or until cranberries have burst. Remove from heat and add liqueur, if using, and transfer to a container or serving dish. Let cool at room temperature, then refrigerate until needed. Sauce will thicken as it cools.

For soaking the cranberries

For cooking the cranberries

Bring first measurement of sugar and water to a boil, then let cool to about 105 degrees. Add cranberries to simple syrup and let sit at room temperature for 8 hours. Place a plate or screen overtop of cranberries to ensure they are completely submerged in syrup.

Remove cranberries using a slotted spoon and place them on a screen on baking sheet or a baking sheet lined with parchment paper. (The simple syrup can be reserved and used for holiday cocktails or another dessert.) Dry for about 1 hour, then toss in sugar until evenly coated. Store in air-tight container at room temperature for up to about three days.

Here are a few vintage recipes and cooking tips for cranberries, dating from 1953 all the way back to 1796.

From Recipes for Eatmor Fresh Cranberries, 1953

Boil sugar and water together 5 minutes. Add cranberries and boil, without stirring, until all the skins pop open—about 5 minutes. Remove from heat and cool in saucepan. Makes one quart.

From The American Frugal Housewife by Lydia Maria Child, 1829

Cranberry pies need very little spice. A little nutmeg, or cinnamon, improves them. They need a great deal of sweetening. It is well to stew the sweetening with them; at least a part of it. It is easy to add, if you find them too sour for your taste. When cranberries are strained, and added to about their own weight in sugar, they make very delicious tarts. No upper crust.

Cranberries. Stewed, strained, and sweetened, put in paste No. 9, add spices till grateful, and baked gently.

Rub in half a pound of butter into one pound of flour, four whites beat to a foam, two ounces of fine sugar; roll often, rubbing one third, and rolling two thirds of the butter is best; excellent for tarts.

To Stuff and Roast a Turkey or Fowl

One pound soft wheat bread, 3 ounces beef suet, 3 eggs, a little sweet thyme, sweet marjoram, pepper and salt, and some add a gill of wine; fill the bird theirwith and sew up, hang down to a steady solid fire, basting frequently with butter and water, and roast until a steam emits from the breast, put one third of a pound of butter into the gravy, dust flour over the bird and baste with the gravy; serve up with boiled onions and cranberry-sauce, mangoes, pickles or celery.

Others omit the sweet herbs, and add parsley done with potatoes.

Boil and mash three pints potatoes, moisten them with butter, add sweet herbs, pepper, salt, fill and roast as above.

Find more recipes from Linda Burner Augustine on her blog A Year at the Table.

Learn more about Ovens to Betsy.

Read about the Ilwaco Cranberry Company.

Cranberry Sauce with Dried Cherries from Food and Wine

Here’s the Foolproof Pie Dough crust recipe Betsy Rogers like to use.