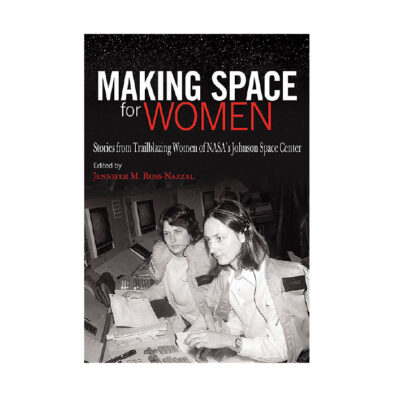 Another, in her first job out of high school, babysat for astronauts after work. Still another, a mathematician, was asked to fill in for two weeks for a secretary who was on her honeymoon. When she retired as an engineer nearly 40 years later, NASA hired 10 men to replace her.

Throughout the history of the National Aeronautics and Space Administration and American space exploration, women and their contributions have remained relatively unknown. Historian Jennifer M. Ross-Nazzal noticed “a marked absence” and set about gathering their stories. The result is this volume featuring the personal stories of nearly two dozen NASA women.

Their stories are told in their own words, edited from transcripts from the Johnson Space Center Oral History Project, which started in 1996. As of last year, more than 1,400 interviews have been recorded.

Many of these women faced adversity and persevered. Some grew up poor. Some didn’t go to college. Some dreamed of being astronauts as young girls. Often, they were the only woman or one of few women in their work group or the first woman in a department or particular role. They offer insiders’ views of NASA⁠—from day-to-day operations and workplace dynamics to personal interactions with famous astronauts, including John Glenn and Alan Shepard, and details such as NASA engineers keeping Playboy calendars on their desks and pictures of pinup models inside large cabinets in the 1970s.

Ross-Nazzal’s compilation of their struggles and dreams, careers and legacies is conversational, approachable, inspirational, and powerful⁠—a perfect read for girls and young women interested in science, technology, engineering, and math, or whose career aspirations include working for NASA. Women who work or have worked in STEM or for NASA would also be interested in this book of well-edited personal histories.