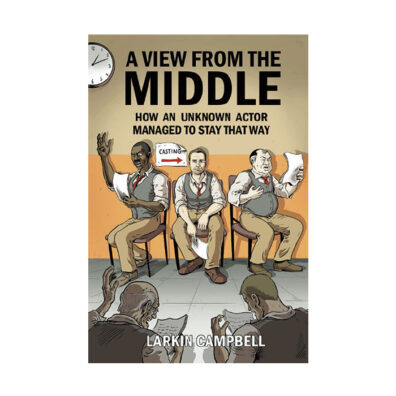 Clint Eastwood. Tom Cruise. Steve Carrell. Larkin Campbell has crossed paths with them and more. But, as the title of his memoir suggests, you’ve likely never heard of him. And you might not even recognize him, unless you are a fan of the 125th episode of The Office, in which he plays Coach Shane, husband of the girlfriend of main character Michael Scott.

Campbell has made a career of playing non-recurring TV roles and serving as a movie stand-in. He’s written screenplays that haven’t sold and short films seen by, he says, “hundreds,” plus this book and several articles about “life as an actor who’s been relegated to staying home with the kids.” He has three: twin sons and a daughter.

Campbell moved to Los Angeles⁠—or, as he calls it, “the land of undiscovered actors”⁠—right before getting his degree. He drove down for an internship at Entertainment Tonight, where he sometimes brought Mary Hart and Leeza Gibbons breakfast. He more or less never left La La Land.

It’s where he met his wife, assistant director Maria Battle Campbell, who’s working on the Avatar sequels. While her career climbed, his went up and down, and⁠—for long periods of time⁠—flatlined. He once went 28 auditions in a row without landing a gig. Other times, according to IMDb, he scored roles like Maintenance Man No. 1, Hospital Father, Idiot Golfing Friend, and Desk Officer. In 2009, he booked one job.

Campbell deals with the rejection, disappointment, and anxiety of life as a struggling, “nonathletic, average-looking” actor with humor and by throwing himself into his two favorite roles: husband and father. His amusing memoir details 30 years of adventures in the industry⁠—from a young Hollywood hopeful to a veteran of auditions, casting calls, call-backs, and set-backs.

A View from the Middle offers a lively look behind the scenes. Campbell, who sometimes refers to himself in third person, is comical, self-deprecating, and full of praise for his favorite stars. Readers might sense there’s more to some of the stories, such as anecdotes from when he was an assistant to Roseanne Barr and Tom Arnold.

Still, Campbell writes, “This business is nothing short of magical. There is no other art form like it … The joy is in the journey … and although at times, my career felt elusive, it’s been a big overblown joy for this guy. … If success means you love where you are and what you have done, then I’ve won the California State Jackpot Lottery ten times over.”