I wanted to thank you and Joshua Snyder for sharing the beautiful photo of the wheel fence and Dahmen barn on the inside cover of the Winter 2021 issue. The fence was built by my great-uncle, Steve Dahmen. My great-aunt, Junette, was an artist and Uncle Steve said the fence was his art. Both Uncle Steve and Aunt Junette were huge Cougar fans, attending home and away games for football and men’s basketball. I know they would both be thrilled to see this photo;they loved hearing from people and seeing photos of their home place all over the country. They’ve both passed on but I’m certain they are still cheering for their Cougs.

When I read the article about the Daily Evergreen, it reminded me of a fortuitous coincidence.

In the fall of 1966, the Daily Evergreen decided to help prepare students for that fall’s election by running columns by the presidents of the Young Republicans and the Young Democrats.

We formed a friendship and a connection that lasted over the years.

Almost three decades later, when I was serving as Washington’s Secretary of State, we had extremely challenging legislative proposals regarding vote-by-mail, the top-two primary, and extensive reform following the Gregoire-Rossi recount. Fortunately for me, Sam Hunt chaired the House committee that handled that legislation. He sponsored many of the bills and helped pass more.

Our Daily Evergreen connection helped make our state’s election system the best in the nation.

More to the story

As the author of Polly Bemis: The Life and Times of a Chinese American Pioneer (2020), editor of Hidden Heritage: Historical Archaeology of the Overseas Chinese (1993), and author/editor of other works on Asian Americans in the West, please allow me to point out several errors in the otherwise -fine article, “How Chinese Pioneers Helped Build the Pacific Northwest” in your Fall 2021 issue.

First, Polly Bemis’s “Chinese name” was not “Lalu Nathoy” (p. 31)⁠—there is no evidence for that name. “Polly Hathoy” is on her 1894 marriage certificate; her surname was recorded as Hathoy at the Idaho County Courthouse. The earliest occurrence of the name “Lalu Nathoy” seems to be in 1947, in Volume 1 of Sr. Alfreda Elsensohn’s Pioneer Days in Idaho County, p. 97. There she states, “As previously indicated, in the Certificate of Marriage, her Chinese name was Lalu Nathoy.” In a copy of that document the name Lalu is not mentioned.

Second, there is no “secret network of [Chinese] tunnels” under the streets of Pendleton, Oregon. For an explanation of this myth, please see my “Exposing Negative Chinese Terminology and Stereotypes,” in Chinese Diaspora Archaeology in North America, ed. Chelsea Rose and J. Ryan Kennedy, pp. 83–108 (2020), or “The Myth of Chinese Tunnels in Pendleton” by Renae Campbell and Priscilla Wegars. 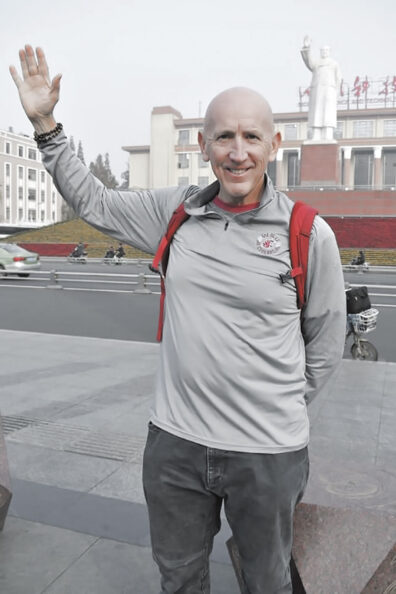 Greg Clark (’84 Chem.) visited Lhasa, Tibet, and Beijing, China, in 2018. He was operations director for health care testing and analysis company Quest Diagnostics for 14 years and is now with the US Geological Survey as director of the Laboratory and Analytical Services division.

What are your memories?

Johnson Hall at WSU Pullman is slated to be demolished and replaced with a new agricultural research and USDA building. What are your memories of Johnson Hall? Send them to us at the magazine.