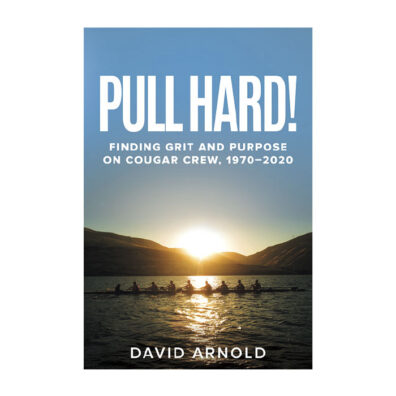 It started with Rich Stager (’74 Civ. Eng.), a freshman who made up flyers and posted them around campus. A scrappy group of, at that point, non-rowers started turning out Saturday mornings to help build a shellhouse⁠—only to have it destroyed in a savage windstorm a year later. Back then, Cougar Crew had no coach, no money, and no boats. Despite its humble beginnings, including help from the rowing program at the University of Washington, Cougar Crew grew into one of Washington State University’s most successful club sports and its only varsity club sport.

Former WSU oarsman David Arnold, now a history professor at Columbia Basin College, went on sabbatical to write this detailed history of the first 50 years of Cougar Crew. His well-researched account discusses the program’s hardscrabble start, struggle for equipment and funding, and impressive perseverance. Overcoming challenges and working hard together helped the “Boys in the Boat in the Wheat Fields” become a tight-knit, committed team, one that produced national champions as well as a couple of rowers who went on to win Olympic gold.

Those Olympians, along with former coaches and oarsmen and women, recall the camaraderie, grit, white caps, key races, and other highlights that built the program into what it is today. Drawing from more than 90 personal interviews, back issues of the Daily Evergreen and the Pull Hard newsletter, and more, including reporting from this magazine, Arnold offers a comprehensive look at the formative years and continued growth of Cougar Crew⁠—from the long-running reign of Coach Ken Struckmeyer, the 1979 Pac-10 Coach of the Year, to the birth of women’s rowing at WSU and the recent era known as “The Reawakening.” Pull Hard! is a must-read for past, current, and future members of Cougar Crew, its coaches, parents of WSU rowers, and fans of Pacific Northwest rowing.