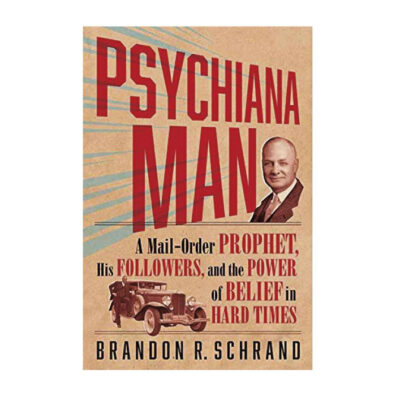 This is the true and bizarre story of a largely unknown, mail-based, self-help, American religion with “a money-back guarantee” and the charismatic, publicity-craving confidence man who established it in, of all places, Moscow, Idaho.

Frank B. Robinson was a drunk and a vagabond who couldn’t seem to hold down a job until he invented one. He didn’t graduate from college but he called himself a doctor. He certainly wasn’t a psychologist, but he called himself that, too. And a prophet. He also announced, in a newspaper ad in all capital letters, to have “talked with God.”

Repeat it enough, and others start to believe it, too, and repeat it themselves. At least, some people.

In this extensively researched tale of a man and his movement, Brandon R. Schrand points out, time and time again, instances in which Robinson lied⁠—about where he was born, when he married, how much he paid for his fancy Duesenberg convertible, even his own name⁠—or at the very least, grossly exaggerated the truth. He was, Schrand notes, known as a cheat, charlatan, and snake oil salesman. And he had, as the Oregonian wrote in 1939, “grown rich at the expense of the gullible.”

Psychiana’s “students” paid a dollar per “lesson” during the Great Depression and World War II for Robinson’s so-called wisdom on how to achieve “health, wealth, and happiness.” Schrand, interim director of communication at the College of Agricultural, Human, and Natural Resource Sciences at Washington State University, intersperses their stories throughout his detailed account of Robinson’s life and the rise and fall of what Robinson dubbed “the new psychological religion.”

The name “Psychiana,” he told followers, came to him in a dream in 1929 in Moscow, where he had moved a year earlier with his wife, Pearl, and son, Alfred. She took him and, later, daughter Florence, to Moscow’s Presbyterian church.

Schrand doesn’t take sides, relying on documents, newspapers, letters, other archival materials, and Robinson’s own writings to discuss the complex, often contradictory, cult-like leader. It’s a fascinating story from the outset. The entry point is Robinson’s small-town, high-profile trial that made headlines across the country. The self-made messiah was facing deportation.

Born in England in 1886, Robinson traveled as a teen to Canada with one of his three younger brothers, given up by his father and new stepmother. He worked across Canada before taking a train to Portland, Oregon, where he signed up for the US Navy, claiming to have been born in New York. He was soon discharged for drinking and for being, as records described him, “unreliable as to his veracity.”

He spent years roaming the Pacific Northwest, getting and losing jobs. The prospect of work in the timber industry later led him to Klamath Falls, Oregon, where he met Pearl Leavitt. She was 14 years his junior and preparing for her freshman year of college.

After they wed, they bounced around to Arizona, California, back to Oregon, then Yakima, where “Robbie” worked at Pioneer Drug and got the notion to start a “Movement.” Upon moving to Moscow, the town’s newest druggist soon pounded out his 20 “lessons” on an old typewriter, borrowing text and ideas from contemporaries.

Six weeks after the 1929 stock market crash, Robinson founded a religion that relied heavily on newspaper, magazine, and radio advertising. Five years later, Psychiana reportedly raked in $422,000, or nearly $8 million in today’s currency. The New Thought religion was the largest correspondence religion in the world.

In a richly layered narrative that seems ripe for the big screen, Schrand expertly explains, with impressive depth and breadth, how a one-time ne’er-do-well transformed himself into a keen marketer and salesman, vending hope and self-improvement to tens of thousands through the US mail. Psychiana Man just might renew interest in a figure and philosophy that have basically been forgotten.