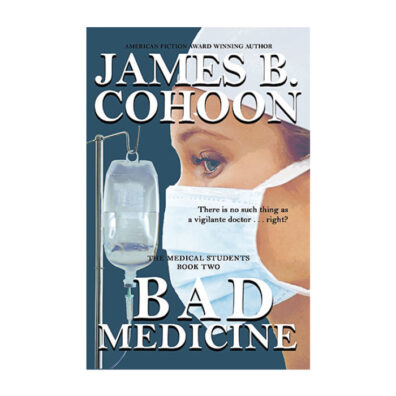 James Cohoon is back with another contemporary medical thriller starring the two main characters from his first novel. Even-tempered heir Matthew Preston and sassy, whip-smart Torrey Jamison, now newlywed and living their dream, are serving as medical residents in San Diego when someone from their past comes back with a plea.

Suddenly, they’re in the thick of a dangerous adventure, this time aimed at righting medical wrongdoing. They just need to confirm their suspicion: a local doctor is bilking desperate and vulnerable families of hundreds of thousands of dollars, promising a cure-all for their children’s brain cancer.

Bad Medicine picks up where Do No Harm leaves off and jumps right into a new action-packed plot. Like Cohoon’s first book, this volume is a fast-paced page-turner. It deftly weaves in a bit of backstory for readers who might have missed or forgotten elements of the first book.

This tension-filled sequel combines medicine and malpractice with motifs of greed, fraud, sexism, and more. Cohoon’s writing demonstrates understanding of the medical profession, particularly the brutal, 80-hour work weeks of residents, and sets the scene for another volume in his Medical Students series.