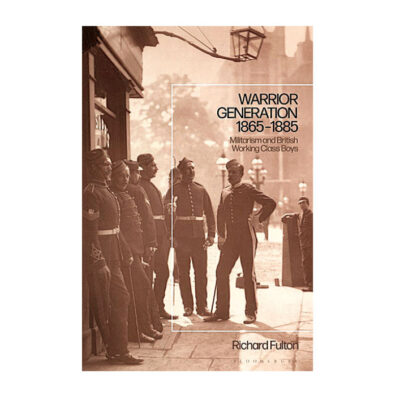 “For lower-class young men,” in Victorian Britain, Richard Fulton writes, “life was pretty much black and white. There were survivors and there were losers.”

That didn’t make them soldiers. And, it turns out, neither did the establishment’s attempts at indoctrination.

In this narrowly defined but deeply researched study, Fulton explores the activities that shaped the lives and attitudes of lower-class boys in late Victorian Britain. He shows that pervasive messaging in education, entertainment, and popular media contributed to a growing culture of masculinity and adventure, but generally failed to militarize a generation. His richly nuanced account delves into boys’ work and family lives, schooling, leisure time, reading materials, and more, including petty crime. Among the most interesting observations are those that come directly from the boys themselves via memoirs and autobiographies.

While focusing on a particular period, age group, and issue, Fulton offers a porthole to Victorian culture as a whole. Readers learn how these boys viewed warfare, masculinity, fighting, recreation, and work. Their employment options were extremely limited; joining the military was one choice. Despite national discourse, propaganda, and the prevalence of mythologized war heroes in the press and fiction, most working-class males preferred to stay local, taking jobs as laborers rather than enlist.