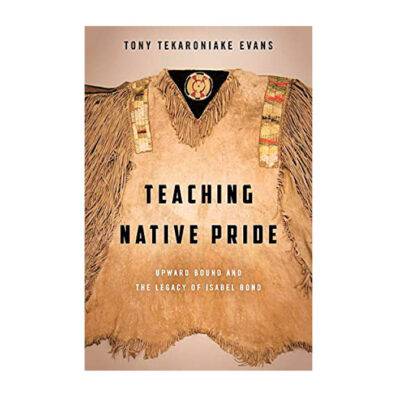 Beginning in the 1970s, Native high school students traveled in the summer to the University of Idaho (UI), often in a repurposed limousine nicknamed the “Gray Goose,” for life-changing experiences led by Isabel Bond.

Pulling from interviews with students and staff, Teaching Native Pride tells the story of the federally sponsored Upward Bound program that offers Native and other at-risk and low-income students academic support and a unique curriculum at the Moscow, Idaho, university.

Bond became director in 1973, after Upward Bound started in 1969, and remained in that position at UI for more than three decades. A non-Native from north Idaho, Bond educated herself about the Niimíipuu (Nez Perce) and Native issues, while bringing Native students into academic life as they never had been before.

Experimental initiative Upward Bound, as part of Lyndon B. Johnson’s War on Poverty, required participants to be the first in their family to pursue a college degree. The students, who historically were denied these opportunities, received six weeks of intensive instruction in mathematics, laboratory sciences, composition, literature, foreign languages, and study skills. Since the UI program participants had to live within 200 miles of the university, many of them were members of the Niimíipuu and Coeur d’Alene Tribes.

A good number of the Upward Bound students went on to become leaders in Indian Country. Chris Meyer was part of Upward Bound’s inaugural group at UI and the first Coeur d’Alene tribal member to receive a doctorate. She now oversees the tribe’s Department of Education.

“Upward Bound had a profound effect on my life,” Meyer told author Tony Tekaroniake Evans. “It planted a seed. Back then, there were no counselors meeting with us to discuss college. … Only Upward Bound could provide us with these possibilities.”

Evans, an award-winning reporter and columnist in Ketchum, Idaho, is an enrolled Bear Clan member of Quebec’s Kahnawake Mohawk Community. He brings to life an inspiring story of how one dedicated person made a difference and inspired many Native students to celebrate their heritage, break cycles of poverty, and teach non-Natives about Indigenous cultures.