Their brotherhood took off from the Sigma Nu chapter house in Pullman to careers as Marine Corps helicopter pilots flying two presidents of the United States.

Jeff “Cliffy” Tontini (’89 History) and Dan “Dano” Ircink (’89 English) were pledge brothers to Sigma Nu fraternity as freshmen at Washington State University in 1985, but they couldn’t foresee that their parallel paths would take them to the skies and around the world.

Ircink went to WSU for the ROTC program, knowing he wanted to continue the family flying tradition. His father was a US Army helicopter pilot until the late 1960s, when he became a teacher in Spokane and flew helicopters in the summers, sparking the younger Ircink’s interest.

Flying for the US Marines was a direction that neither Ircink nor Tontini expected, though.

“As it turned out, we had a fraternity brother who went into the pilot program with the Marine Corps,” Ircink says. Dan McGough (’86 Math.) “convinced both Jeff and I that was the way to go.”

The two decided to pursue the career, but it wasn’t easy right off the bat, beginning with a tough six-week officer candidate school at Quantico, Virginia, during the two summers of their junior and senior years.

“My junior year we had 80 candidates start, and we graduated 35 or 37,” Tontini says. “It’s boot camp on steroids because they hope that the officers are not only as strong as enlisted, but mentally stronger to lead men and women.”

“They wire-brush you to see if you’re going to fall out or stick to the program,” Ircink agrees.

Tontini says they averaged two to three hours of sleep. “I lost 10 to 15 pounds. You couldn’t eat enough because you’re burning through calories. It’s part of the crucible.”

The pair successfully emerged from the testing ground and, after graduation, accepted their commissions. Both attended The Basic School in Quantico for officers, but in different platoons. Their next stop was the Pensacola, Florida, flight school, where they were roommates.

“Dan had a leg up,” with some flying lessons and his father, Tontini laughs. “I didn’t know the front end from the back end of an aircraft.”

They were trained not only on helicopters but on fixed-wing aircraft as well. Moreover, all pilots-in-training endure rigorous physical tests, including swimming, aerodynamics, and running. Approximately 30 percent leave the training.

Although the two brothers-in-arms received orders around the world from Afghanistan to Okinawa to California, their paths crossed often. They first served together in Somalia flying from the deck of the USS Peleliu.

When they were stationed at the same place or nearby, the pair would get together and watch the Cougs play football.

One assignment in particular sticks out. Both men had the privilege of flying two US presidents, Bill Clinton and George W. Bush, as well as other heads of state, for four years as members of Helicopter Marine Experimental-One (HMX-1), known more commonly as Marine One.

Among many other memories, Ircink recalls landing on the South Lawn of the White House when dropping off President George W. Bush.

Tontini remembers one tricky flight escorting Russian Prime Minister Vladimir Putin from the Waco, Texas, airport to President Bush’s ranch for a summit. “Putin wasn’t a big guy, but his six KGB bodyguards were 230 pounds and built like linebackers. The weight and balance was definitely off.”

The pilots say they often had friendly interactions with the presidents. “President Bush would always slap you on the shoulder,” or ask you to go for a run at Camp David, Tontini says. Vice President Dick Cheney, though, would nod and say hello, but was generally all business.

Both men say it was a pretty special assignment.

“It’s so memorable, flying down and seeing the Jefferson and Lincoln Memorials. It’s five o’clock in the morning, the sun’s coming up, and you’re about to fly the president,” Tontini says.

Tontini retired from the Marine Corps in 2013 with more than 23 years of service. He lives in Wenatchee with his wife, Kari, and two daughters, Sierra and Denali.

Ircink also retired in 2013 after 24 years in the Marine Corps, and now lives in Nine Mile Falls near Spokane with his wife, Keri, and children Jessica, Noah, and Hannah. 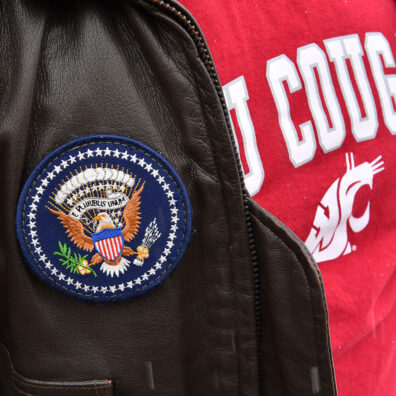