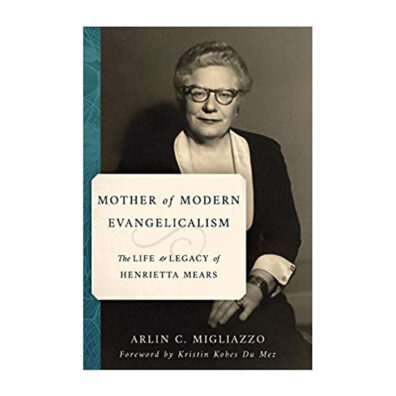 Besides his wife and mother, evangelist Billy Graham called Henrietta Mears the greatest female influence on his life. Bill Bright, founder of Campus Crusade for Christ, crafted his life’s work according to her principles. So did Jim Rayburn, creator of Young Life, and dozens of other “Mears boys.”

As director of Christian education at First Presbyterian Church of Hollywood, Mears persuaded generations of young people and adults alike to put their faith in Christ. She spoke in front of crowds of hundreds at Christian conferences around the country, authored Sunday school curricula used by thousands of churches, created a nonprofit to bolster Christian education programs around the world, founded her own publishing house, and helped bring music and movie stars into the evangelical fold.

She did all this and more with a particular “generosity of spirit,” writes Arlin C. Migliazzo, professor emeritus of history at Whitworth University, in his academic but approachable biography of one of the most influential but largely underappreciated engineers of modern American evangelicalism. His deeply researched account offers historical context along with the chronology of events that shaped the pioneering Sunday school teacher’s rise to power in the Presbyterian Church.

Migliazzo portrays Mears as a charismatic, forthright, and formidable character who transformed Christian education in mid-century America. He examines her involvement with the National Association of Evangelicals, creation of the Forest Home Christian Conference Center, and connection of prominent conservative Protestants to each other and the wider community and culture. At the time of her death in 1963⁠—35 years after her arrival in Hollywood in 1928⁠—her Sunday school was the largest in the country. Perhaps more than anything, Mears was a bridge builder, coaching and connecting future leaders of the evangelical movement for generations to come.