The sturdy and massive buoy, made from some 800 pounds of military-grade steel, was likely once used to help hang anti-submarine and anti-torpedo netting in Port Townsend Bay. A system of heavy floats and cable netting⁠—think giant chain-link fencing for bodies of water⁠—was part of a maritime defense system designed to protect US Navy assets in Puget Sound during World War II.

Netting manufactured in Building 77 helped protect Naval Air Station Seattle and Puget Sound Naval Yard as well as Indian Island. It was lowered into the water from a tender, then attached to the seafloor. A series of super-sized buoys like this one, which stretches five feet in diameter, kept the netting afloat.

Creosote-treated wooden floats, manufactured in Bremerton from 1942 to 1943, were ordered by the Navy’s Bureau of Ordnance specifically for use by Indian Island. But the starting point of the steel floats appears lost to history. “Unfortunately,” says Indian Island spokeswoman Julianne Stanford, “we don’t know the origin of the metal buoys used at the island.” However, she says, Indian Island “used the metal buoys more frequently than the wooden ones to suspend the anti-submarine nets across the harbor inlets in Puget Sound. They were much easier to handle and attach since they were lighter and smaller than the heavier wooden blocks.”

Bread Lab director Stephen Jones bought this particular metal buoy from a friend who found it on their property. Inspired by a similar creation at Dented Buoy Pizza and Catering at Finnriver Farm and Cidery in Chimacum, ten miles south of Port Townsend, Jones set out to repurpose the find, transforming it into a wood-fired pizza and bread oven. The first group to use the buoy, Johnson says, was a leadership team from Microsoft. In November 2019, Bread Lab employees cooked Thanksgiving dinner in it, including a turkey. 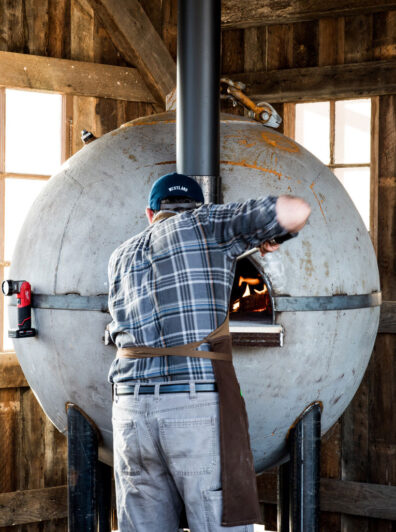 Today, the salvaged buoy⁠—insulated and outfitted with legs and an inner dome fashioned from an old propane tank⁠—weighs “at least a ton and a half,” Jones says. A crew from Skagit Valley Malting helped retrofit the buoy-oven, which can reach temperatures of up to 1,000 degrees Fahrenheit. It was installed in late 2019 in a rustic dining hall, built with reclaimed barn wood, in the Bread Lab parking lot. The plan, pandemic-permitting, is to host a series of pizza workshops, including classes with John Shelley, owner of Dented Buoy.