When Mike Urban began his studies through Washington State University Global Campus, he had no idea his academic journey would lead him to Pullman City Hall.

A business owner for 20 years, Urban was active in charity and volunteer work in his community of Mount Vernon. But, he says, “There was a point where I decided I wanted to start a new chapter in my life and pursue my education again.” 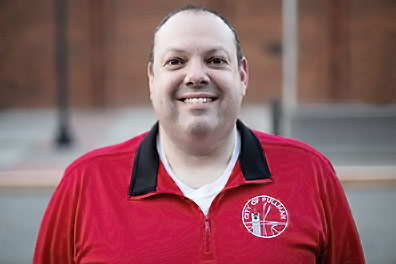 “I learned a ton and at times it was a challenge keeping up with school, work, and family,” says Urban, a married father of two. “But like a lot of things in life, it’s the challenging things that usually end up being the most worthwhile.”

In late 2018, Urban (’11 Acc., ’16 MBA) was offered the job of finance and administrative services director for the city of Pullman. Feeling he didn’t want to pass up the opportunity of a lifetime, Urban immediately accepted and started in January 2019. He was appointed Pullman city administrator in January 2021.

“I couldn’t have done it without my family who supported me every step of the way,” says Urban, who believes the knowledge and skills he gained through WSU Global Campus played a significant part in being selected for the position. “Getting my degrees through WSU Global Campus put me on a path to where I am today. I’m very grateful for the opportunity WSU gave to me and where it has led me in my career.”

Urban is charged with managing the city’s assets and maintaining its financial health. “I love the work, and I’m honored to be able to serve the people of Pullman,” he says. Even after a short time, “it really feels like home.”

Though he never attended classes on the WSU Pullman campus, he says he always felt included as a member of the Cougar community. This feeling only intensified after arriving in Pullman.

“The Coug nation embraces their own in a way I’ve never seen,” Urban says. “Around here it’s all about community and supporting each other. It’s amazing to see and I’m so glad to be a part of it.”