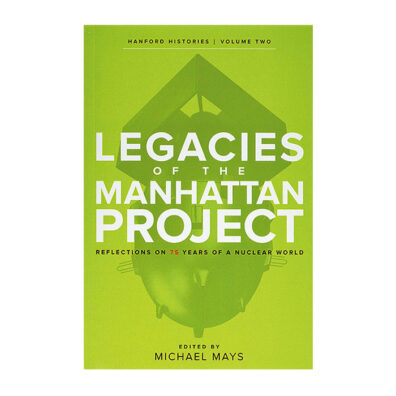 Many of the academic essays in this book, the second in the Hanford Histories series, were first presented in 2017 at the Legacies of the Manhattan Project at 75 Years conference in Richland, situated along the southern edge of the Hanford Site. In his introduction, Michael Mays — professor of English at WSU Tri-Cities, director of the Hanford History Project, series editor, and editor of this volume — points out that this nearby location is where the plutonium that fueled the nuclear bomb dropped on Nagasaki on August 9, 1945, was produced. “As the following essays attest,” he writes, “the Manhattan Project’s afterlives animate the present in profuse and often urgent ways.”

This scholarly retrospective goes beyond the Hanford Site, providing the kind of complex analysis that only time and extensive scrutiny allows. Thoroughly researched annotated essays explore the myriad impacts that the top-secret government operation has left on the world, from education, health, and the environment to politics and pop culture. The depth and breadth of this collection makes clear that the history of implosion science remains relevant.

Mays, in fact, argues that the Manhattan Project “was the most significant event of the twentieth century.” And it’s difficult to disagree after contemplating these eleven chapters illustrated with nearly 30 images. Essays examine the refinement and testing of weapon designs, emergence of more than two dozen teaching reactors for training students during the Cold War, journalists’ and other writers’ accounts of atomic warfare and radiation, contamination in the Columbia River, cancer as a result of nuclear fallout, collective identity regarding radiation exposure, and “atomicalia,” or the material manifestation of the atomic era in relics from children’s toys and comic books to soaps and cure-alls.

Purchase the book at WSU Press