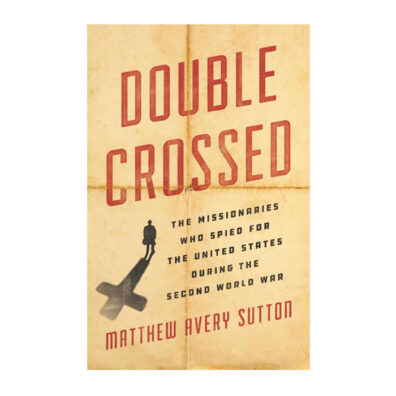 William “Wild Bill” Donovan formed the first U.S. foreign intelligence agency, the Office of Strategic Services, in World War II. He recruited a secret army, including clergy, “holy spies who fought around the globe for the sake of their God and their country.” The role of those missionaries and other men of faith was kept under wraps for many years, even after the war’s end.

In Double Crossed: The Missionaries Who Spied for the United States During the Second World War (Basic Books, 2019), Matthew Avery Sutton, Berry Family Professor of Liberal Arts and chair of the Department of History at Washington State University, tells for the first time the long-hidden history of those missionary spies. The following excerpt from the book introduces one such man, whose language skills and cultural knowledge led him to surreptitiously serve the United States in North Africa.

A most unlikely spy (excerpt)

William Alfred Eddy did not look the part of super spy. No movie mogul would have cast him as a James Bond or a Jason Bourne. The middle-aged professor had a limp, a receding hairline, a pudgy face, and an expanding waist. He also had a disarming smile, a deep laugh, and an eternally delightful sparkle in his eye. He served as a marine in World War I, and after the war, he dedicated his life to the cause of peace. He became a missionary, sharing the Christian gospel with students in the Muslim world. When the United States returned to war in the early 1940s, he again responded to his nation’s call to serve.

Eddy joined a ragtag group of men and women who launched the United States’ first foreign intelligence agency, the Office of Strategic Services. Leading the OSS was William “Wild Bill” Donovan, an irascible Irishman who had gone from marine to lawyer to politician to spymaster. Donovan sent Eddy to North Africa, where the missionary could put his knowledge of the Koran, years of practice speaking Arabic, and partner-ships with Muslim leaders to good use.

Not long after hitting the ground in Tangier, Morocco, Eddy became the target of Axis intelligence agents. The skills he had honed as a missionary made him a marked man. An Italian spy tried to plant a bomb in his car, but Eddy’s chauffeur was vigilant and kept him safe. A few weeks later, Eddy learned from a double agent working for the British that Axis spies were again scheming to “unobtrusively” slip a bomb into his vehicle. Eddy’s American bosses warned him to take the “greatest precautions” or he would be returning home in a box.1

Eddy was one of the OSS’s most effective field operatives. Donovan had sent him to prepare the way for Operation Torch, the 1942 Allied invasion of North Africa, which was central to American and British plans for taking control of the Mediterranean. Eddy advised Generals George Patton and Dwight Eisenhower on the incursion strategy. He also recruited a secret network of local agents on the ground in North Africa. His most audacious undertaking included a plot to “kill,” as he described it, “all members of the German and Italian Armistice Commission in Morocco and in Algeria the moment the landing takes place.” In a straight-forward and matter-of-fact memo, he told Donovan that he was targeting dozens of people. He additionally ordered the executions of “all known agents of German and Italian nationality.” Never one to mince words, he called the proposal an “assassination program.”2

To orchestrate the daring and ambitious plot, Eddy hired a team of Frenchmen. His “principal” hired gun was the father of a boy who had been imprisoned in Paris by the Germans. “The father,” he noted, “is impatiently awaiting permission to carry out this assignment.” Eddy wanted to ensure that no one could trace the assassinations back to him or the OSS. He planned to frame the executions as a “French revolt against Axis domination.” “In other words,” he explained to Donovan, “it should appear” that the dead Germans and Italians were “the victims” of a French “reprisal against shooting of hostages by the Germans and other acts of German terror,” and not an OSS operation.3

Assassination plots were not the only thing on Eddy’s mind. At about the same time that he was recruiting French hit men, he wrote to his family about the sacrifices he was making for Lent. He described the Easter season as “abnormal” this year. “I am certainly abstaining from wickedness of the flesh,” he confessed. With his wife thousands of miles away, that was not too difficult. “I haven’t even been to a movie since Lisbon, I don’t overeat any more, and I allow myself a cocktail at night, but never before work is all done.” At the time, he was attending services at the local Anglican church. The “small community” of congregants, he wrote home, knew that fellow believers around the world were joining with them in “the act of consecration and penance.” He told his family he was thinking of them and that he was praying that “all of us come through to better days when mercy and charity again return to the earth.”4

The calculus was clear for Eddy. To honor the death and resurrection of his Lord and Savior, no movies, no fleshly wickedness, and not much booze. Pray for mercy and charity to return to earth. And in the meantime, covertly arrange for the murders of Germans, Japanese, and Italians.

The war, the assassination plot revealed, seemingly changed everything for religious activists turned spies like Eddy. Or maybe it didn’t. Maybe assassinating those who did the devil’s handiwork represented the logical culmination of their sense of global Christian mission, how they planned to bring peace and charity back to earth. If they hoped to restart their religious work after the war, they first had to defeat the evil that blocked their path. Perhaps for Eddy and dozens of other holy spies, serving a secretive, clandestine US wartime agency tasked with defeating German and Italian fascism and Japanese militarism was another way, maybe the best way, to serve the very same Jesus they sought to emulate as missionaries.

They were never quite sure.