Cora Harrington keeps it right up there on the wall, hanging in her husband’s shop just below his bachelor’s degree. When she received the certificate at the end of May, right around the time Michael Harrington (’67 Mech. Eng.) received his diploma, “It meant a lot to me,” she says. “It was an honor to be recognized.”

And it remains an important keepsake. “I’ve had it framed ever since I received it,” she says. “In 53 years, it’s been on the wall in almost every room of the house.” 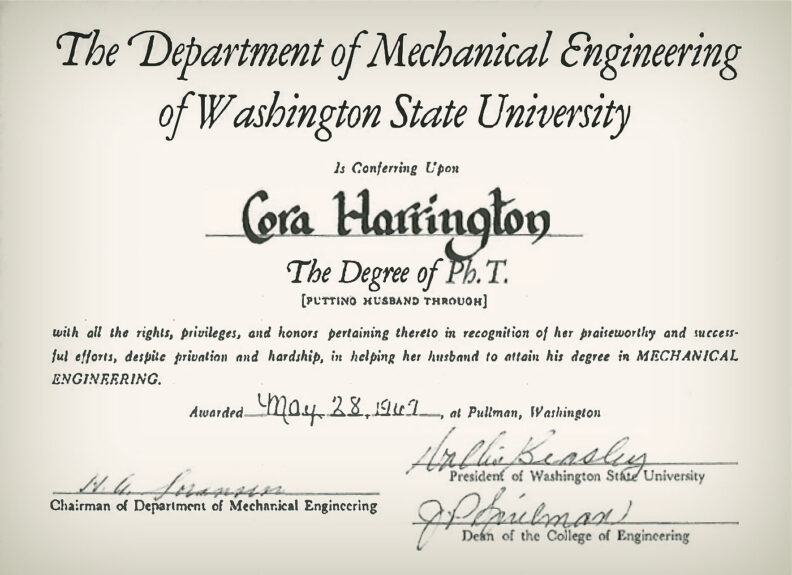 Washington State University was one of many institutions of higher learning across the country to recognize wives’ contributions to their husbands’ education with “Putting Husband Through,” or “PHT,” degrees, in appreciation for work outside the classroom, from earning money to support their households to caring for their young children and tending to their homes.

The practice of presenting PHTs is now largely lost to history. But it was particularly popular in the post-World War II era and continued through the 1960s. At WSU, the effort was coordinated by the Kappa Chapter of the National Association of University Dames, a social and charitable club for wives of college students. WSU’s mechanical engineering program had an especially active sub-group, called the ME Wives.

Harrington joined University Dames after arriving in Pullman in January 1965. The couple, high school sweethearts from Bremerton, lived in married student housing at 44C South Fairway. She turned 20 that February, and their daughter was born in March. Harrington worked on campus as an administrative assistant in the Department of Physical Education for Men. She was also among the last groups of wives at WSU to receive the PHT recognition.

Her certificate, presented by the Department of Mechanical Engineering at WSU, conferred her degree “with all the rights, privileges, and honors pertaining thereto in recognition of her praiseworthy and successful efforts, despite privation and hardship, in helping her husband to attain his degree in mechanical engineering.” It’s dated May 28, 1967. And it’s signed not only by the department chair but by the dean of the College of Engineering and the University president himself.

PHTs were typically awarded at potlucks or informal ceremonies during social gatherings, says University archivist Mark O’English. But the group doesn’t seem to have donated their records to the WSU Archives. If any former members or others hold records, photos, or documents associated with the organization, “we would love to have them,” O’English says.

“Unfortunately, the only original document that I can identify here in the archives is a single 1947 newsletter,” he says. “There are a couple of other things—two event photos from 1948 and 1952, a ‘40s-era schedule of Dames-sponsored sewing classes, and some activity tickets from 1946 to 1949. No diplomas, though.”

According to that Dames Doings newsletter, WSU’s Kappa Chapter formed in 1920 and joined the national association of University Dames a year later. By 1947, the organization had about 50 chapters at college and universities nationwide. The initiation fee for the Kappa Chapter was a dollar. Dues were a dollar per semester.

Members met once a month on the second Monday “for a short business meeting followed by a program.” In addition, there were several special interest groups that met outside of chapter meetings for bridge, music appreciation, swimming, tennis, and preschool. Monthly social activities—such as dances—included both husbands and wives.

“I can remember some picnics, Christmas parties, and a flag football game out in Palouse on some farmer’s field,” says Doug Auburg (’65 Mech. Eng.), whose late wife Tamara was a member of the group. He married his high-school sweetheart the summer before he started school in Pullman. “I had some money saved,” he says, “but she supported me. She worked for a time at the Pullman laundry and then later at the Arctic Circle restaurant. We both worked summers.”

Their first child, a daughter, was born in Pullman in spring 1964, a year before his graduation. Like the Harringtons, they, too, lived on South Fairway; “8A was our address,” recalls Auburg, who looked for “any evidence of the place” during his Golden Graduate reunion a few years ago. But, “Those houses had been gone for a long time.”

He isn’t sure where his wife’s PHT degree is these days, either. “It was something she put away for safekeeping. What’s happened to it in 55 years, I don’t know. But it was a recognition that these women had been a great help to their husbands. They carried on this tradition, and it was passed down until the pool of married students apparently dried up and went away.”

Auburg estimates “40 or 50 percent” of his mechanical engineering cohort were married. But, he says, “When my son graduated from the same program in 1989, he estimated only 5 or 10 percent of his class were married.”

The last mention of the Kappa Chapter in the University’s archives appears to be 1971, O’English says.

The New York Times on April 9, 1974, referred to the honorary degree as “a quaint relic.” Nadine Brozan wrote: “It was called the ‘Putting Hubby Through’ diploma, and it was once awarded by universities as token thanks to wives of students. But with the drive for equality propelling women into the upper reaches of academe, the decision to support a student husband is being weighed on a new scale. After all, the reasoning goes, if John can study medicine; why can’t Jane; if he aspires to a professorship, why not she? And in the face of dual ambitions, the question of who pays for whom and how has taken on new complexities.”

The highest numbers of PHTs were awarded just after World War II, when veterans enrolled in unprecedented numbers. Marriage rates, which had remained low during the war, soared after its end.

Most veterans wanted to return to civilian life as soon as possible—getting college degrees, starting careers and families, and settling down. Marriage rates, which had remained low during the war, soared after its end. In the late 1940s and early 1950s, WSC enrolled more married students than ever before and had to build or acquire additional housing to accommodate them. The South Fairway wartime homes were such structures, and ended up serving multiple generations.

“We were the generation after the G.I.s,” Auburg says. ‘We were at the beginning of a time of transition to women working after marriage as an accepted social thing. The PHT degree was a symbol. It represented a partnership, one partner helping another.”