When the first cases appeared October 1, the gymnasium was quickly converted into a temporary hospital. Three weeks later, classes were canceled for a month. The state epidemiologist ordered Washington State College under “complete quarantine.” All social activities were suspended.

By November 2, the Students’ Army Training Corps (SATC) saw 634 sickened cadets, over half their number. Just five days earlier, there were 98. By the end of the ordeal, 42 would die. 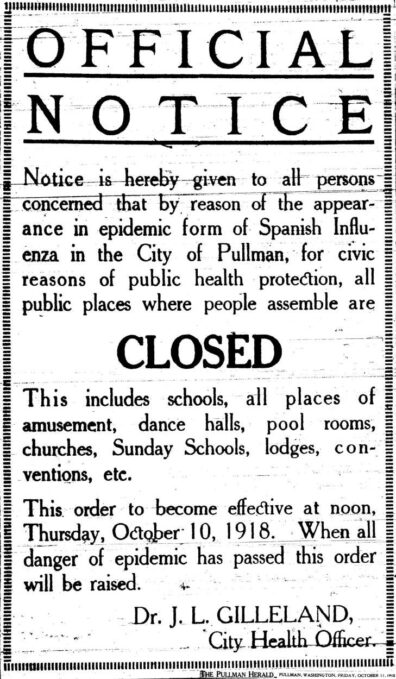 During the final months of World War I, an influenza pandemic swept through WSC, dramatically affecting the campus community. Buildings were transformed into infirmaries with as many as 300 bedridden cadets. Faculty and female students from the College of Home Economics came together to prepare meals for the sick.

“The real challenge was the SATC,” says Trevor Bond, associate dean for Digital Initiatives and Special Collections at Washington State University. “That’s where all the deaths happened.”

Cadets came to campus, a designated training camp, beginning that June. A second cohort arrived in August. “As I understand it, we somehow ended up with fifty percent more trainees than anticipated,” says University archivist Mark O’English. “They didn’t have enough room. All it takes is one or two to have been exposed. In close quarters, an outbreak seems inevitable.”

The 1918 Influenza Pandemic killed people in their prime, disproportionately claiming the lives of men and women in their 20s and 30s, and—in just one year—dropping life expectancy by about 12 years for men and women, down to ages 37 and 42 respectively. According to the Centers for Disease Control and Prevention, it was “the most severe pandemic in recent history,” killing more people than WWI, one of the deadliest wars in human history.

Some 500 million people worldwide—a third of the global population—were infected. At least 50 million died, including some 675,000 Americans. In Washington state, nearly 5,000 people perished.

WWI claimed the lives of just over 1,600 Washingtonians. In all, approximately 9.7 military personnel and about 10 million civilians died in the Great War, and American military losses totaled more than 116,000. Of them, approximately 53,500 died in combat. Nearly an equal number died of the flu.

While the origin of the 1918 Influenza—sometimes referred to as the Spanish flu or La Grippe—is debated, there’s no question that the pandemic and the war were closely related. WWI started in Europe in 1914, and America joined the Allies three years later. Some 1,200 students, faculty, and staff from WSC went to war. Over 80—including WSC’s flu victims—died.

Overfilled camps and trenches along the Western Front fostered the virus, which traveled with military members from camp to camp and across the Atlantic. From September through November 1918—at the height of American involvement in the war—it’s estimated up to forty percent of United States Army and Navy personnel was infected.

That’s about the same time the pandemic was taking its toll in Pullman, where more than half of the SATC cadets—some of whom also developed pneumonia—fell ill. “The flu didn’t hit when the first soldiers came in, but when it hit it really hit,” O’English says. “It didn’t hit the town nearly as badly as it hit the soldiers.”

WSC’s outbreak was largely contained within the corps, which swelled to 1,325 cadets in America’s build-up for the war. Among the College’s 700 students not involved with the SATC, there were 75 cases and no deaths. Off-campus, some 150 people of Pullman’s then-population of about 3,000 took sick. Six died. Victims drowned in their own bodily fluids, their lungs filling with a bloody foam. A century ago, O’English says, “They didn’t know completely how to treat it.”

By the time the third cohort of cadets arrived in early October, the flu was already spreading throughout SATC ranks, and supplies were limited. Wool clothing was reserved for soldiers overseas, and the shortage of wool uniforms for WSC’s trainees made headlines around the state. Cadets were clad in cotton. “They didn’t have warm enough clothing and bedding,” Bond says.

Pullman’s Northwest Sanitarium, with 33 beds, was overwhelmed. So were the WSC hospital and converted gym and Mechanical Arts Building. Three local churches were transformed into sick wards, along with at least two fraternity houses: Sigma Phi Epsilon and Alpha Tau Omega. Convalescents recuperated in Ferry Hall and on the top floor of the Administration building.

WSC nurse Mary B. Packingham set up the church hospitals and served as head of the ATO infirmary, which she also organized. She had recently enlisted and was awaiting her call to serve overseas when the flu broke out. She worked as many as 36 hours straight tending to patients. Packingham died of the flu herself at the ATO house on October 29. The Pullman Herald called her “a martyr to duty.”

To help stop the spread, all public gathering places were closed, and sentries were posted around WSC to keep cadets from leaving. “We literally had soldiers patrolling the edges of campus,” O’English says.

Passes were required for going on and off campus. And, said former WSC bursar Clarence Hix for a 1980 oral history project for the Whitman County Historical Society, “we had to wear masks.” Hix, who worked at the College from 1911 to 1957, recalled a professor who refused to show a guard his pass. The guard pulled out his gun.

Agnes H. Craig, head of the College of Home Economics, along with her entire faculty, mobilized, preparing a series of special meals for the sick. Sixty-two female students aided their efforts. Townswomen donated food. “Baskets of fresh ranch eggs, dressed chickens, jellies, potatoes, fruit and many other foods were anonymously sent to Van Doren Hall to be prepared for the sick,” Craig wrote, noting there were also donations from the Pullman Chamber of Commerce, Red Cross, Women’s Relief Corps, and more.

When the pandemic was at its worst, Craig and her crew prepared more than 900 meals per day. In all, they had served some 17,000 meals during the crisis. “Home Ec. became this giant kitchen,” Bond says.

Post Surgeon Captain I. S. Collins wrote to Craig and her “Corps of Assistants” on November 6, expressing “deep appreciation of your coming to our rescue in our hour of need. … You provided for (the sick), doing it in a most scientific, appetizing, and tasty manner.”

It wasn’t enough, one father argued. Spokane’s Roger S. Sanborn charged the College and War Department with mishandling the pandemic, alleging both were responsible for cadet deaths, including that of his son, Roger P. Sanborn. The state launched an investigation. Both WSC and the government were cleared of any wrongdoing.

On November 11, when the armistice ending “the war to end all wars” was announced, people filled Pullman’s main street to celebrate, burning an effigy of Kaiser Wilhelm II. Nurses masked up. Most others didn’t. SATC troops—“some 1,200 strong,” according to The Pullman Herald—paraded through downtown. “Bells ring, whistles, shriek, soldiers parade and ‘flu’ bug is forgotten,” the newspaper announced.

That same day, Craig wrote to Leila Wall Hunt, associate professor of home economics: “It is with the sincerest appreciation that I shall ever remember your able, cheerful and untiring service rendered … during the difficult days of the influenza (pandemic). It would be difficult to experience a finer spirit or quality of cooperation than has existed among members of my staff in association with a large representation of faculty women and women students who volunteered their aid in a time of need.”

Hix was on a ferry, traveling from the Olympic Peninsula to Seattle, as “they were just then ending the war.” There was a piano on board, and someone asked if he could play. He couldn’t, but his wife could, and she played for the troops aboard the boat, and they sang and celebrated. They had been visiting Fort Worden, where WSC had transferred “a contingent of five hundred (cadets) … and half of them died. They died over in Fort Worden of the flu.”

Stories from the 1918 Pandemic and World War I

The lost history of polio at Washington State