They share a special kind of kinship, not only because of their common bond but because so few have enjoyed the privilege. Of donning the suit, sporting the tail, learning to walk the walk⁠—that swagger is a trademark move⁠—and becoming the legendary fierce but friendly character.

Butch T. Cougar is a WSU celebrity, in the spotlight at games, rallies, parades, and other events both on campus and off, including appearances at elementary schools and the wedding receptions of die-hard alumni. But the students who play the role remain largely anonymous, at least until their big reveal at the end of basketball season. Maintaining the secret is part of the mystique.

And it’s a big reason why it took Michael “Max” Baer (’15 Econ.) some four and a half years to track down alumni who played the part. While he was Butch from 2012 to 2015, the Facebook group for former Butches “was pretty small. We were missing two-thirds of the Butches or more,” he says. “It was a good resource, but it wasn’t what it could be. It’s a lot more active now.”

Baer started tracking down former Butches “hoping it would lead to a stronger alumni group. However,” he says, “as I dug deeper into WSU’s mascot history, I found stories and experiences which shed light on the beginnings of many WSU traditions. Butch has been directly involved in so many historic events and funny interactions, and still stands as a tangible part of WSU life after 40-plus years.”

Baer worked nights and weekends, mainly via social media, to find fellow Butch alumni. “It was pretty slow-going in the beginning,” he says. “I posted in alumni groups. I reached out to friends from the years that I needed, asking, ‘Did you know who Butch was? Did you know anyone in band or on the Rally Squad or cheer team?’ It was pretty tough to track people down, particularly the female Butch of the 1990s. I was trying to find her for like two years.”

The overwhelming majority of Butches have been male. The character itself is masculine. Tami (Turek) Zapata (’93 Biol.) played Butch from 1989 to 1991. Then, she cheered for WSU for two years, from 1991 to 1993. During her reveal at the final men’s basketball game of the 1991 season, she danced to “Sharp Dressed Man” by ZZ Top wearing the tux costume her mother sewed for Butch. “The whole audience was quiet,” she says. “They weren’t quite expecting a girl, so that made it even more fun. They were shocked.”

Baer tracked down the last Butch—“the missing link”—about a month before the first-ever Butch reunion, a fortieth birthday party for Butch during ESPN College GameDay in Pullman on October 20, 2018. During pre-game festivities, former Butches signed autographs. During the game, they were recognized on the field.

“It was the first time any of us were in the middle of the field without the Butch mask on. The crowd was cheering for Butch, but they were also cheering for us. It was a very weird feeling, but a very good feeling. Sort of nostalgic, kind of like déjà vu,” Baer says, noting, “The most rewarding part of this entire experience was reuniting friends who hadn’t seen each other in years, even decades, and reigniting friendships.”

Washington State College played its first football game as the Cougars in 1919. It wasn’t until 1927, when then-state Governor Roland Hartley gave campus a live cougar cub, that Butch T. Cougar was born. The mascot was named for Herbert “Butch” Meeker, a football star of the era.

Butch VI, the last of WSU’s live cougar mascots, was gifted to campus by then-state Governor Albert Rossellini in 1964. When the animal died in late summer 1978, students protested placing another live cougar in a cage and then-WSU President Glenn Terrell decided Butch would take a different track. For the two years before Butch VI died, Peggy Robison, a member of the Crimson Rally Squad, donned a Butch suit for games, and the costumed character became the permanent tradition.

That first year, students switched off suiting up. “It was sort of up to the rally squad to decide: Who was going to be Butch for this game?” says Dean N. Grevé (’81 Comm.), Butch from 1979 to 1981. “It was Butch by committee. We were all sitting around, and it was like, ‘Who wants to do this? Who wants to wear the suit?’ Butch was a different height, a different shape, at every game”—until Grevé took over the role. “There was only one instruction when you were given the suit: You can’t tell anyone you’re Butch.”

Today, Grevé says, “I still watch every Coug game I can, and I loved going back to that reunion. The thrill of being out on the field with that group—it transports you. I don’t run like I did when I was 20. But you feel that same energy running out there. I haven’t had that feeling in decades. What I wouldn’t give to put that suit on one more time.” 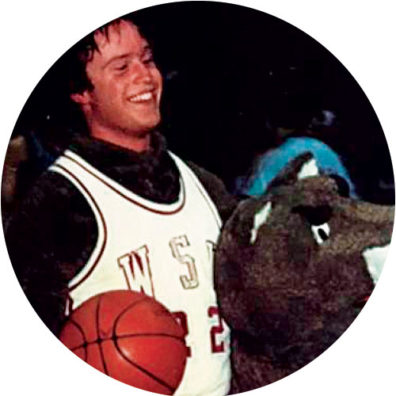 “As soon as I put the head on, it was showtime. It wasn’t me anymore. It was Butch. It was always in the back of my head that I was representing the school. I tried to be warm, inviting, and outgoing. Everyone wanted to hug and high-five Butch and get their picture taken with you. You’re Butch The Cougar. Everybody was happy to see you. Their eyes just lit up. I felt like everybody’s best friend.” 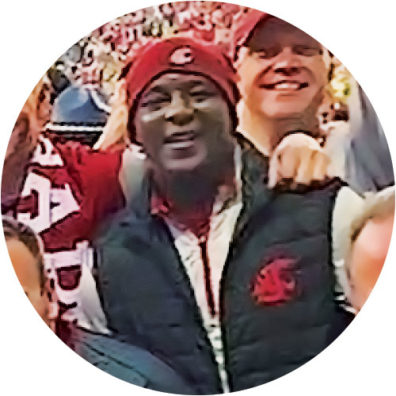 “Many of my friends now, after 30 years, are just now finding out that I was involved. It’s fun keeping it a secret when you’re in school. I was able to go up into the stands with friends and have fun with them without them knowing it was me.” 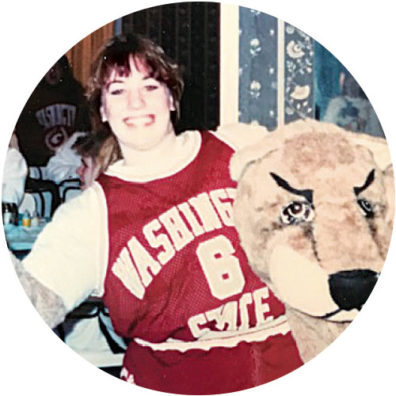 “I learned to walk like a guy. The character is a guy. And I said if I got the part I would play it as a guy. I would wear extra-large shoes. I wouldn’t let on that I was a girl. When people would shake my hand, I’d try to make sure it was very firm. My whole time as Butch I made sure everyone thought I was a guy.” 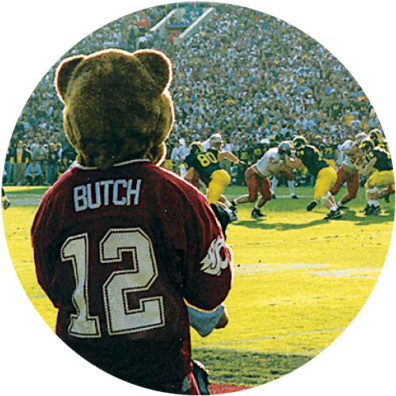 “I always tried to bring athletic ability and energy. Just like a cartoon character, you’re always bouncing. You’re constantly moving. I tried standing back tucks, back handsprings, walking on my hands. I always wanted to take it to the next level. I thought if I could do that it would bring a lot more swagger to the character.” 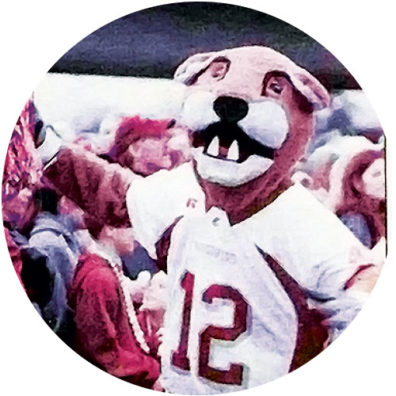 “The fur itself only got washed, I’d say, maybe four or five times in a season. It would get so gross and stinky—like a dirty gym bag with layers and layers of different fragrances, whether it’s Febreze or just straight-up cologne. That was a stinky, stinky time. I don’t miss the smell.” 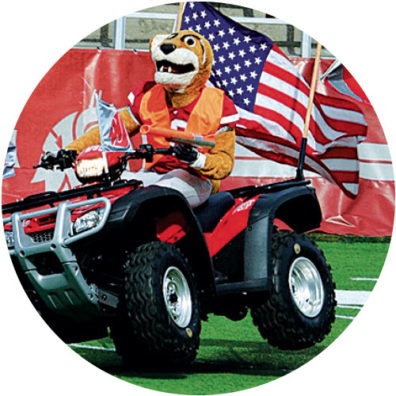 “I didn’t tell my brother or my sister or my roommates until I got unveiled. That was such a cool moment, almost as cool as the first time I did ‘Go Cougs.’ There’s so much pride in being the coolest guy in school and no one knowing. I think, for me personally, it’s made my Cougar spirit and my Cougar pride that much stronger. I feel like I’ve got a connection to Butch the character but also this ‘furternity’ that connects us and spans 40 years.” 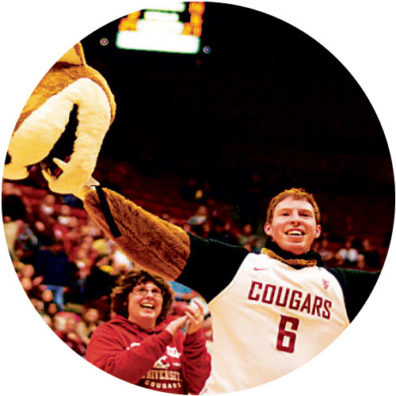 “Every new Butch is very similar to the old one. But there is always something added that makes Butch cooler
and better.”

Have memories of Butch T. Cougar? Send them to wsm@wsu.edu.

Behind the mask: Profiles of Cougs who became Butch T. Cougar

Butch looks back: Reflections on life as the WSU mascot