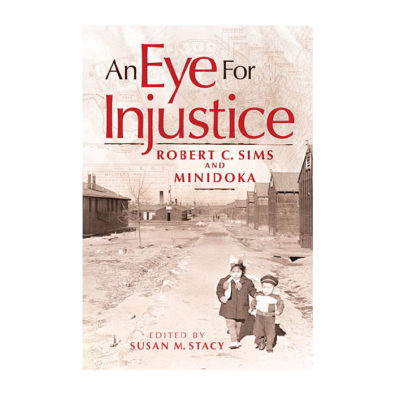 She’s sitting on the edge of a suitcase, holding a pint-sized purse and partially eaten apple. Bundles of belongings surround the bewildered child, staring off-camera.

Yuki Llewellyn was nearly three years old when she was sent along with her young, single mother to the Manzanar War Relocation Center. They had been evacuated from their home in LA’s Little Tokyo to the Lone Pine, California, camp.

Her iconic image caught the eye of Robert C. Sims. A framed copy of the now-famous photo, a symbol of Japanese-American internment during World War II, sat on the historian’s desk from the early 1970s until his death in 2015.

Sims learned of America’s confinement of Japanese Americans as a doctoral student in the late ’60s. He was angered by the injustice of their imprisonment as well as the “sad commentary on the education system of America that would permit an event like that to go unnoticed in the education career of someone who is presumably going to go out and teach American history.”

The U.S. government forcibly relocated nearly 120,000 people of Japanese ancestry on the West Coast, most of whom were American citizens. This included entire families, orphans, and adopted children. The Minidoka War Relocation Center, like Manzanar, opened in 1942.

Sims made it his life’s work to research, write, and teach about the incarceration. Shortly after arriving at Boise State University in 1970, he discovered several boxes of Minidoka-related materials at the Idaho State Historical Society. Those boxes led to one of his first research projects at Boise State—and fueled a lifelong passion. For more than forty years, he traveled throughout the Northwest, talking to former internees about their experiences.

Sims dreamed of writing a book, and this well-curated compilation honors that wish and offers a compelling legacy. It’s a fitting testament to his commitment not only to preserving the past but to promoting social justice. The paperback volume—with an introduction by his wife, Betty—features a selection of scholarly writings and speeches from 1978 to 2011 as well as photos from his personal collection.

Sims taught at Boise State until 1999, serving for a time as dean of the College of Social Sciences and Public Affairs. He also served on the Boise City Planning and Zoning Commission and Idaho Humanities Council.

The girl in the picture was released with her mother in 1945 with $25 and a pair of government-issued bus tickets. She went on to work for 37 years at the University of Illinois, Champaign-Urbana, where she helped start the Asian Studies program and retired in 2002 as assistant dean of students and director of registered organizations.

Order An Eye for Injustice from WSU Press