Compared with the current trauma of coronavirus, the imminent loss of an insect species, or even of many, may seem less than dreadful. Sadly, it is not.

Over the past couple of decades an increasing number of reports have warned of dramatic declines in insect populations worldwide. The most definitive review so far, a meta-analysis published this spring in Science, pulls back a bit from the dourest prognoses, but is itself hardly cheerful. Authors compiled data from 166 long-term surveys of 1,676 sites spread across 41 countries and found an average decline in terrestrial insect abundance of approximately 9 percent per decade. Curiously, they also found an increase of freshwater insect abundance of approximately 11 percent per decade.

Those numbers for freshwater insects offer at least a drop of cheer, as they probably reflect improved water quality. However, fresh water accounts for only 2.4 percent of the earth’s surface.

In spite of what can appear a bleak scenario, one nevertheless can find here and there a glimmer of optimism. Faced with data sufficient to cause grave concern, at least a couple of Washington State University scientists embrace a mixture of trust in insect resilience and a determination that despair is not an option.

Referring to her efforts to restore pollinator habitat and rebuild threatened butterfly populations, WSU Vancouver conservation biologist Cheryl Schultz says, “I wouldn’t be doing this if I didn’t think there was hope.”

For his part, David James is even more upbeat, at least in a relative sort of way. Why? Look at the past as comparison, says James, an entomologist with WSU’s Irrigated Agriculture Research and Extension Center (IAREC) in Prosser.

“We’ve improved incredibly from what it was 30, 40 years ago. And the insects are still with us.”

This is not, however, to say that everything is rosy in insect land.

“There are lots of twists and turns in the road,” says James, who recently published results of a small study adding to evidence that neonicotinoids, which seem to be less toxic to mammals than organophosphates, turn out to have unanticipated effects on non-target insects.

James found that monarch butterflies in the laboratory exposed to neonicotinoids at a rate commonly found in nectar dramatically reduces their longevity. By day 22, he writes, “only 3/14 individuals in the treated group were still alive compared to 8/10 in the untreated group …

“This brief and simple laboratory study while limited in scope and replication, indicated that the neonicotinoid … has a profound impact on the survival of adult monarch butterflies within a short period of time. … Prior to death, treated monarchs displayed characteristic uncontrolled vibrating, trembling, and flapping of wings, similar to neonicotinoid poisoning in honeybees.”

The most unsettling thing about neonicotinoids, James says, is “we don’t know how ubiquitous they are in the environment.” Their persistence and versatility are both strength and detriment.

Also, rates of neonicotinoids used in urban areas are greater than in agriculture. Farmers generally pay closer attention to warning labels than do suburban homeowners. “The nectar in backyard butterfly gardens might be more contaminated than in agricultural fields.”

Most worrisome about the reported declines is that the loss of even a small fraction of insects might be disproportionately consequential.

Thirty-five percent of the foods we eat require insect pollination. Pollination further results in increased production of 85 percent of food crops. In the Pacific Northwest, apples, cherries, apricots, plums, blueberries, and strawberries are just a few of our economically vital foods that depend on insect pollination.

Insects are at the bottom of the food chain. They are food to many. Apart from seabirds, 96 percent of North American bird species feed insects to their young. Birds alone eat 400 to 500 million metric tons of insects per year.

Assessing the status of insect populations is tricky. There is no worldwide baseline for the world’s million or so named insect species. (Scientists believe millions have yet to be discovered.)

Regarding their decline, “most of what we have been able to do so far has been anecdotal or has been limited to a small number of species,” writes Peterson in an email.

“But I think that there are plenty of signs that we should be concerned. For one, there are certainly some species that used to be quite abundant that are now exceptionally rare. The Western bumblebee is a case in point.”

Peterson cites the rate of collection of Bombus occidentalis by students in his department’s entomology course at WWU. Abundant in the 1970s and ’80s, since about 1995 specimens collected by students have dwindled to virtually none.

“Anecdotally,” he continues, “there’s the oft-cited windshield phenomenon, whereby one seldom has to clean insect splatters off of our windshields now, unlike decades ago.”

Schultz recently joined 57 other scientists worldwide in urging the adoption of a “roadmap for insect conservation and recovery” in Nature Ecology and Evolution. “There is now a strong scientific consensus that the decline of insects, other arthropods and biodiversity as a whole, is a very real and serious threat that society must urgently address,” they write. They cite as the causes of this decline: habitat loss and fragmentation, pollution, invasive species, climate change, and overharvesting—and propose remedies that reflect the urgency of the problem.

Among them: reverse recent trends in agricultural intensification, aggressively reduce greenhouse emissions, increase landscape heterogeneity, and encourage insect-friendly farming. The list of urgent measures goes on, with restoration of habitat among the most crucial.

A recent United Nations report notes that “three-quarters of the land-based environment and about 66 percent of the marine environment have been significantly altered by human actions.” In addition, urban areas have more than doubled since 1992.

Regional loss of habitat mirrors this picture. Although a drive across central Washington might convince one that sagebrush is forever, the sagebrush ecosystem is considered one of most imperiled in the United States

According to James, diminishing shrub-steppe habitat of southeastern Washington has resulted in loss of habitat for approximately 50 species of butterflies.

“Before agricultural development, the sagebrush steppe covered an estimated 38.6 million square kilometers, but today it occupies about half (56 percent) of its historic range,” he writes.

Here on the far east side, historically, the estimate of “… grassland loss on the Palouse ranges from 94 percent to 99.9 percent,” writes Tim Hatten (’02 MS Entom.) in a study of bumblebee populations in isolated patches of remnant prairie.

No one is suggesting the return of this phenomenally productive wheat land to insect habitat. However, programs to restore refugia in the form of hedgerows and conservation set-asides could be immensely beneficial. 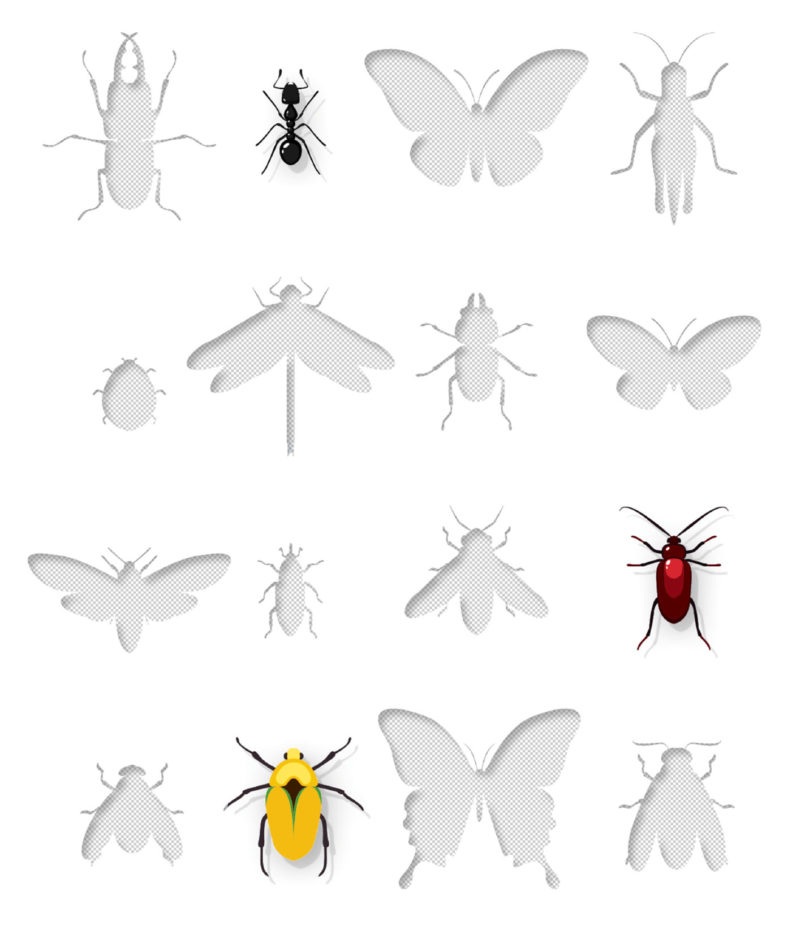 Staff illustration from artwork by Macrovector

One roadblock to insect conservation is that insects have yet to gain the attention that larger, more charismatic fauna enjoy. An exception is the monarch butterfly.

Schultz coauthored an article in Frontiers in Ecology and Evolution last July that raises an alarm over the Western monarch. The butterfly suffered a decline of 97 percent between the 1980s and the mid-2010s. It suffered an additional plummet in the winter of 2018–19, to fewer than 30,000 individuals. The overall drop in the Western monarch population since the 1980s is thus approximately 99 percent, bringing it to what biologists consider a “quasi-extinction threshold.”

Schultz brings to the monarch conservation effort long experience. Over the last couple of decades, she led the effort to head off the extinction of the lovely Fender’s blue butterfly in the Willamette Valley (WSM Summer 2011).

As a result of efforts by Schultz and colleagues—doing the science, coordinating public-private partnerships, and investing massive amounts of time—the Fender’s blue is a rare success.

“It’s one of very few insects that are recovering,” says Schultz. The U.S. Fish and Wildlife Service is actually considering changing the butterfly’s status from “endangered” to the less severe “threatened.”

“Not to say climate change isn’t important. It is. But when people say it’s all about climate, then there’s nothing you can do about it.

“Climate clearly influences year to year variation. But in our signals the long-term decline” is caused by habitat loss and fragmentation.

There are “a lot of very tangible things we can be doing.”

One of those tangible things is James’s work on reintegrating agricultural land with pollinator-friendly habitat, focusing primarily on wine grape vineyards. Wine grape production in Washington has exploded from a few hundred hectares in the mid-1970s to 24,000 hectares in 2019. The nice thing about growing wine grapes in south central Washington is they don’t require a lot of pesticides, making them amenable to restoring native plants within them, restoring habitat for butterflies and other beneficial insects.

Not every form of agriculture is as amenable to native habitat as are vineyards. However, according to Teah Smith (’12 MS Entom.), entomologist and agricultural consultant for Zirkle Fruit Company, Zirkle has planted close to 150 acres of pollinator and beneficial insect habitat in and around its orchards. “We have seen an increase in pollinator diversity and beneficial insect populations in the habitats,” she writes in an email, and so they continue to plant.

Brad Bailie (’95 Crop Sci.), one of a growing number of farmers who include beneficial insects and predators as well as insect pests in their strategy, grows organic onions near Connell, a difficult task made somewhat easier by insectaries that harbor beneficials.

More broadly, WSU entomologists David Crowder, Vincent Jones, and William Snyder were coauthors with 61 other scientists of a 2016 global analysis of the effect of organic farming methods on arthropod abundance and richness: “The positive effects of both organic farming and in-field plant diversification were greatest for two groups of beneficial arthropods: pollinators and predators. Thus, both schemes may increase agroecosystem sustainability by promoting key ecosystem service providers without boosting pest (herbivore) densities.”

It is unlikely that all insects will disappear anytime soon. After all, they’ve been here a lot longer than we have and likely will outlast us by far. (And even in decline, they outweigh us by a factor of 17.)

Meanwhile, we’re still here, and as James observes, so are they. But out of the million or so insect species that we’ve identified, what if the Western monarch does disappear? What have we lost?

Tim Steury is the former editor of WSU’s Washington State Magazine and Universe magazine. He is now an orchardist in retirement cultivating heirloom cider apples and pears. 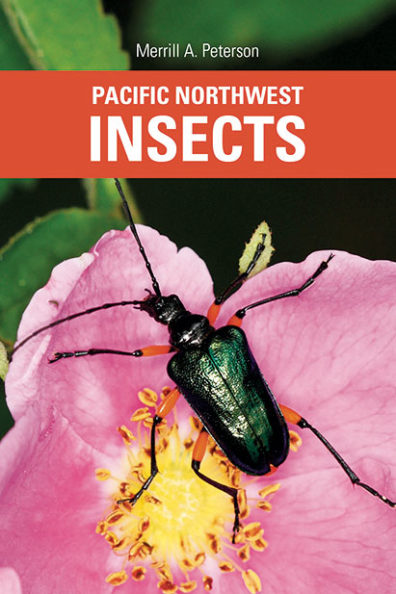 A beautiful and useful field guide, with color photos of more than 1,225 species of insects, spiders, harvestmen, scorpions, and more. You may want to buy two copies, one for your backpack and another for your coffee table.

Peterson is professor and chair of biology and insect collection curator at Western Washington University and adjunct professor of entomology at WSU.

Yes, there is something you can do about insect decline…

As scientists examine the extent and causes of insect population decline, one of their largest tasks is data collection. Understanding trends in insect abundance or diversity requires lots of data, which requires an enormous amount of time. “Citizen scientists” can help immensely. Here are a few possibilities:

Readers in the Yakima area can join the Cowiche Canyon Conservancy for butterfly citizen science opportunities.

Other citizen scientist butterfly opportunities exist for members of the Washington Butterfly Association, which helps monitor and survey threatened species in collaboration with the Washington Department of Fish and Wildlife and the Bureau of Land Management.

The Xerces Society coordinates a number of opportunities, including the “Pacific Northwest Bumblebee Atlas.”

Entomologist David James is interviewed about declining insect populations in an article from The Spokesman-Review.