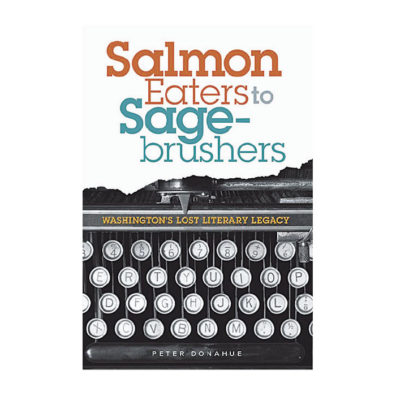 In the introduction to his marvelous collection of biographical essays, Peter Donahue writes that he thought he could produce a dozen or so vignettes on “lost” writers of Washington state. Writing a “Retrospective Review ”column for Columbia Magazine for 13 years, he ended up writing 55. He “kept finding more”—in used bookstores, archives, old newspapers. If the book met his basic criteria (a Washington writer, working in a “basic literary genre,” and of literary merit), he’d track down a copy and read it—and another essay would join the pile.

Salmon Eaters to Sagebrushers collects these essays, and they are wonderful. Donahue’s measure of “literary merit” is broad and generous, and includes ballad (Mary J. Elmendorf) and historical romance (Zola Ross), on the grounds that their “quality of expression transcends” the “sentimental or romantic value” of the particular genre in which the writer worked. He especially credits representations of the Pacific Northwest that go beyond mere description to explore a “mentally bounded place…that rest[s] at the border…between geography and history.”

While the place of Washington and the rest of the Pacific Northwest is secure because of “big L” literati such as Theodore Roethke and Ken Kesey, Donahue dives deeper to recover women writers who, he writes, dominated memoir during the mid-twentieth century, as well as genre writing that was rated second class when originally published. This is not only a great act of preservation, but a fascinating read that adds historical depth to our experience of the Northwest.