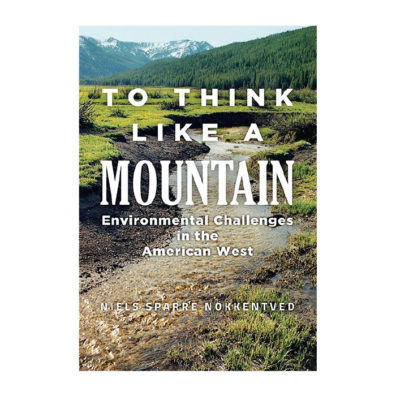 “Thinking like a mountain” is the name of a short essay from Aldo Leopold’s 1949 book A Sand County Almanac. In it, he reflects on an old wolf he shot and killed as a young hunter and how he came to realize wolves play a critical role between prey, such as deer and elk, and the flora of the forest and other natural habitats. He lamented humans need to learn to think like a mountain, or take a long-term view of ecology, including the value of predators.

This similarly titled volume encourages people to do the same thing—to think like a mountain in terms of environmental concerns—in the specific setting of the modern American West. A quote from Leopold’s now-famous essay sets the tone: “Only the mountain has lived long enough to listen objectively to the howl of a wolf.”

Niels Sparre Nokkentved spent two decades as an environmental and natural resources reporter for newspapers in Washington, Idaho, and Utah, and eight years as a writer, editor, and photographer for the Idaho Department of Fish and Game. His new book of essays explores environmental challenges such as wolf recovery, threats to watersheds by abandoned mines, the lingering effects of grazing private livestock on public lands, overcutting ancient forests, and more.

He writes with the straightforward approach of a former newspaperman, presenting facts, history, policy, and modern milestones. He also includes some of his own photographs as well as short, personal, scene-setting vignettes—from the forests of Washington’s Olympic Peninsula and Pacific waters out past the Grays Harbor bar to Big Smoky Creek in the Soldier Mountains of central Idaho and the foothills of the Jarbridge Mountains in Nevada.

He concludes Mother Nature is losing ground. But, he writes, “When we think like a mountain, we will have clean air and water, forests will thrive, wild salmon will spawn naturally and make thousand-mile journeys to their natal streams, sage grouse will strut their stuff on their leks in the western sagebrush grasslands, and the wild green fire will burn in the eyes of the wolf—and that benefits us all.”

Order To Think Like a Mountain from WSU Press