Visit any construction site, whether it’s a house or a 50-story skyscraper, and it’s easy to marvel as a structure goes up.

But look back at the ground level. Piles or bins of wood pieces, asphalt shingles, bricks, concrete, and drywall wait to be moved to a landfill or recycled. The amount of waste is even more pronounced at demolition sites.

And that amount is huge—and growing. Some 40 to 50 percent of the world’s solid waste is estimated to be construction materials. According to a 2018 study, the annual volume of construction waste will double by 2025.

Landfills are getting clogged with all that debris, with additional impacts to groundwater and odor. It’s also a huge expense for construction companies, exacerbated by the recent recycling crises.

Through all the dust and detritus, though, two Washington State University faculty members see potential and opportunity.

Architecture Professor Taiji Miyasaka and David Drake, Fabrication Labs manager and adjunct professor in the School of Design and Construction, took a look at one common type of waste—gypsum drywall—and developed a way to convert it into a construction block. 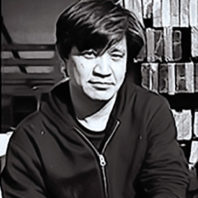 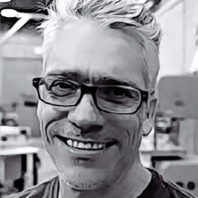 Drywall, also called sheetrock or wallboard, covers walls and ceilings in many buildings, especially in North America. It makes up nearly 10 percent of unrecycled construction waste, with as much as 10 million tons going to landfills in the United States each year.

Recycling causes other issues. Gypsum contaminates concrete, so it cannot be added as fill. Although there are proprietary methods to deal with waste drywall, the process requires removing the paper.

King County and Pierce County have both banned disposal of drywall scrap from new construction in local landfills, so most of the excess drywall, particularly from the west side of Washington state with its larger construction industry, ships to distant landfills in Boardman, Oregon, or just across the Columbia River in Washington.

Miyasaka has a deep background in architecture and teaches studio classes at WSU. He also has a long interest in ecological building design approaches in architecture.

The two men say building materials from recycled gypsum wallboard was originally a response to a materials innovation challenge. They developed it first as a concept and then decided to see how far they could push it as an actual product.

“As far as we know, there’s been actually very little work done on drywall waste. When we first started looking at this, we found a number of recent papers by people who were sort of working with drywall waste,” Drake says. “This seemed to indicate, ‘Okay this is not crazy, this is something that is really a problem.’ But, at the same time, it’s hardly something that’s saturated in terms of research. So, right place at the right time, I suppose.”

Miyasaka nods. “I knew that gypsum has been a problem, but I didn’t know a lot of information,” he says. “So, we talked about it and David said, ‘Well, in South America, people make adobe blocks.’”

Drake says their drywall waste block reimagines compressed earth blocks developed in Central and South America back in the 1950s. However, unlike earth-building traditions, drywall waste blocks divert waste from landfills instead of excavating soil, and are higher performance blocks better suited to colder climates.

The WSU drywall block experiment began in the basement of a building on the edge of the Pullman campus, where Drake and Miyasaka show off their simple, yet elegant, process in what looks like a converted truck bay. At first, they adapted surplus equipment or Drake welded it himself. With additional funding, they’ve been able to design custom machinery fabricated by the Voiland College of Engineering and Architecture’s tech shops.

Using gypsum drywall waste from projects such as the new plant sciences building at WSU Pullman, they grind up everything in a hammer mill, which Drake compares to a leaf shredder.

“One of the things about our process, which is different from every other process we know of for recycling drywall waste, is we don’t separate the gypsum core from the paper. We grind it all up together, and paper facing and backing layers are incorporated into the blocks. It’s giving us a fair amount of strength from the paper fibers reinforcing it, and we believe that’s also part of what’s giving us the high insulation value,” Drake says.

It doesn’t discriminate between types of wallboard either, alleviating the need for sorting.

The ground-up material drops into a barrel and then to a surplus USDA seed coater to receive a minimal amount of water. The damp material is combined with a binder—waste slag from blast furnaces—and moved to a press.

Miyasaka and Drake are on their third- generation block press. “The first one was made out of wood, and took about 15 minutes to make a block. I think we managed to make about 50 blocks or so on the wood press before it completely broke apart,” recalls Drake.

The latest press runs off a hydraulic power unit and makes about a block a minute. Drake estimates that, with automation, it could make up to six blocks a minute.

Miyasaka points to a pallet of blocks covered in plastic, where the drywall waste blocks (DWB) cure for 28 days. They have also successfully tested a low-pressure steam process used by the concrete block industry, which reduces curing time to 24 hours.

The result: a masonry block that looks very similar to a concrete or cinder block, but lighter. It has high insulation value and slightly less compressive strength than concrete blocks. It can accept fasteners such as screws and nails, be cut with ordinary woodworking tools, and absorbs dyes and color similar to concrete.

The process is really simple, say Drake and Miyasaka, and for on-site production, all of the equipment would fit on the back of a pickup or a flatbed trailer.

“We’re trying to compete with concrete blocks that sell for a buck at Home Depot,” Drake says.

They also built a hotbox testing apparatus, essentially a wood box divided in half by a wall of their drywall waste blocks, to simulate an interior room on one side and the outdoors on the other. They keep one “indoor” side at ambient temperature and cool the “exterior,” in order to measure the insulating value of the blocks.

The tests were positive. “These are about half the density of a concrete block, and ten times the insulation value,” says Drake. “We think that a commercial building, for example, nonresidential, you might be able to avoid additional insulation completely. We expect the blocks to be highly fire resistant and have good acoustic performance, too.”

Says Miyasaka, “I was surprised we were able to make a block which performs quite well.”

Drake nods. “It’s one of those few times that it was a good idea and no one ever really had it before.”

Others soon began to take notice of the DWB. In 2018, the researchers received an Amazon Catalyst grant, which encourages people to find innovative solutions to real-world problems.

In addition to the grant, WSU’s Office of Commercialization connected Miyasaka and Drake with industry contacts interested in their product. They met with King County officials in Seattle to see if the blocks would be a viable option for construction of several tiny home communities to house the city’s growing homeless population.

Drake and Miyasaka have also visited with construction companies about the drywall waste block and its potential. “Their responses to our product have helped inform our research, as we continue to look for ways to solve an industry need,” says Miyasaka.

The researchers participated in WSU’s I-Corps entrepreneurial program and received Commercialization Gap Fund support through WSU. They also garnered some initial funding from the American Institute of Architects.

Drake says that by the standards of engineering, though, their funding is really modest at just around $100,000.

Last July, the drywall waste blocks received an American Institute of Architects R & D award, which recognizes innovation in architectural technology. The award was announced in Architect Magazine and is one of eight awarded nationally.

“This is radically useful and radically simple at a time when so many products are trying to call attention to themselves by being unusual,” juror James Garrett Jr. told Architect Magazine.

Craig Curtis (’83 Arch., ’84 Const. Mgmt.), one of the other jurors for the award, told Architect Magazine that the project compares to “the introduction of fly ash into concrete, which now is commonplace. … I honestly think this could become a commodity product.”

While discussions are still ongoing, the blocks could soon have niche uses, such as patio pavers, planters, or landscape walls. It’ll take more testing, possibly over a decade, to receive certification to use the drywall waste blocks as load-bearing walls.

Not just a block

Miyasaka and Drake aren’t waiting around for 10 years. They’re already thinking about other possibilities for drywall waste.

Back in the lab, on a worktable next to shelves full of DWB samples, a cross-section of a wall shows the thick plastic foam that serves as a common building insulation. Drake notes that the plastic product works well on many levels: high R-value for insulating, fairly inexpensive, doesn’t absorb water, and fairly easy to install. However, even if you add fire retardants, it’s still flammable.

Drake and Miyasaka grab a thin panel from next to the wall model. It’s an insulation panel, about one-inch thick, made from drywall waste. They realized the panel could have good potential due to gypsum’s natural fire resistance.

Drake fires up a blowtorch and aims the flame directly onto the panel. When the back of the panel is touched, it’s barely warm.

“We could sit here for an hour or so but it still wouldn’t burn through,” Drake says.

They aren’t looking necessarily to replace insulating foam, but the drywall waste panel could add more insulation while serving as a fire break.

The drywall waste insulation and blocks are just a couple of the products the pair are considering, but always with an eye to the practical.

“In a back-of-the-envelope way for two guys who are not engineers, not chemists, and not economists, we try to figure out, ‘Are we making something that could be produced cheaper? Higher performance?’” says Drake.

It look like there’s no end to supply either. As Drake notes, drywall waste has negative value for companies that pay to have it hauled away, so they’re ready to find a better way to get rid of it.

“The usage of gypsum has been growing radically, particularly in Asia,” says Miyasaka. “The market for drywall, or the use of drywall, is increasing in China and India three times faster than it’s increasing in the U.S.”

Drake adds that the growing Asian market may be really fortuitous for their drywall waste block, because some of those countries have a much stronger masonry building tradition, especially for residential construction. “That could be a really nice symbiotic relationship,” he says.

The drywall waste blocks will continue to go through testing as discussions on commercialization take place.

As the drywall waste products evolve, Miyasaka and Drake also hope they raise awareness of the construction and demolition waste issue, at least for drywall.

“Everybody knows about plastic and knows that there’s a big plastic garbage patch somewhere in the Pacific,” Drake says. “No one knows about drywall. And yet, we’re surrounded by it because it’s an easy-to-install building material. We just need a market for the recycled waste.” 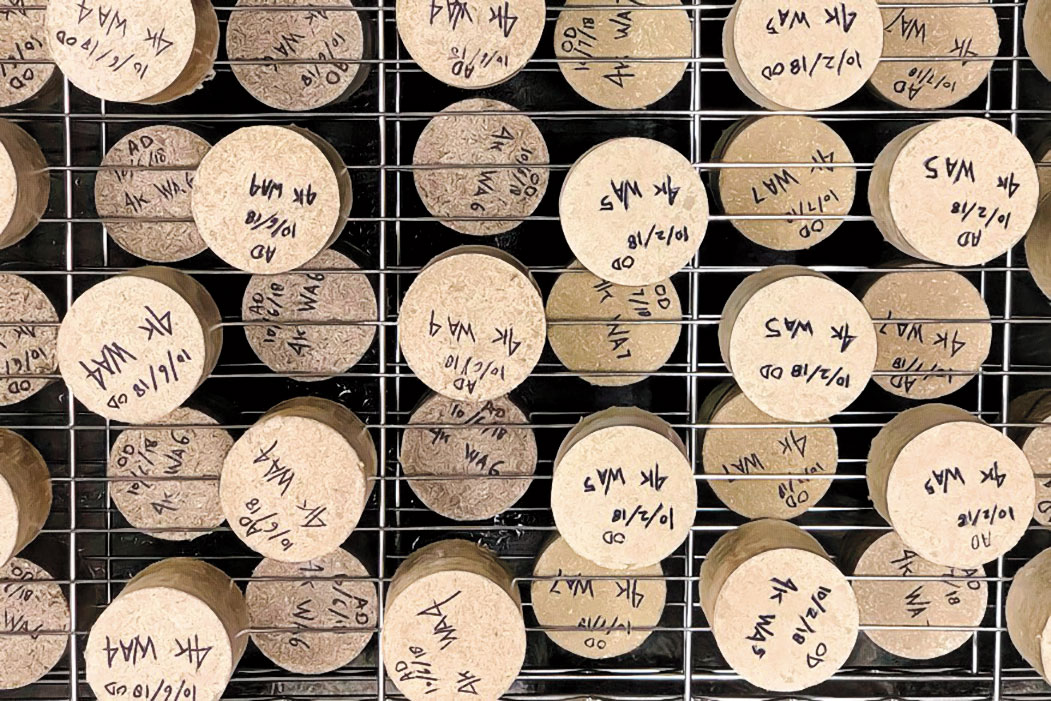 Or watch here on vimeo