She’s used to the question. She hears it all the time. And she gets it. Her name  is  unusual.

And the answer is yes.

It’s almost as though she was destined to do the weather.

She’s a forecaster for KHQ and FOX28 in Spokane as well as the morning show “Wake Up Montana” on KULR,  KFBB, KWYB, and  KTMF.

“I love being able to start someone’s morning off on a positive note, smiling, with lots of energy, lifting them up,” she says. Plus, “People rely on the weather. They use the weather to plan their day.”

She became interested in weather as a girl growing up outside of Spokane.  “I remember watching storms light up our back field. And I’ve always loved the changing seasons across the Inland Northwest.”

Storm is actually her middle name. She uses first and middle names on air because they’re shorter and easier to pronounce than her last name: Tschabold-Grant.

Her middle name was inspired by ESPN anchor Hannah Storm. And, she says, “My mom came up with Majestic from a flower (seed) packet.”

Tschabold-Grant first visited KHQ during high school, telling forecaster Blake Jensen (’09 Comm.) of her dream of becoming a meteorologist for a national morning show. He let her go on-air during his weather segment—and she was hooked. She set up a job shadow with him, and he became her mentor, helping her with her senior project and encouraging her to pursue an internship.

She started working at KHQ full-time shortly after graduating from WSU Pullman, where she was a first-generation college student and worked for Murrow News 8 as well as Cable 8 Productions.

Today she does four hours of live TV from Monday through Friday, waking up at 1 a.m. and arriving at the station by 2 a.m. (Most nights she’s in bed by 6 p.m.)

This leads to another oft-asked question. The answer is also yes: She is a morning person.

“I love morning shows,” she says. “We’re drinking our coffee, we’re listening to music, and we’re having fun.” 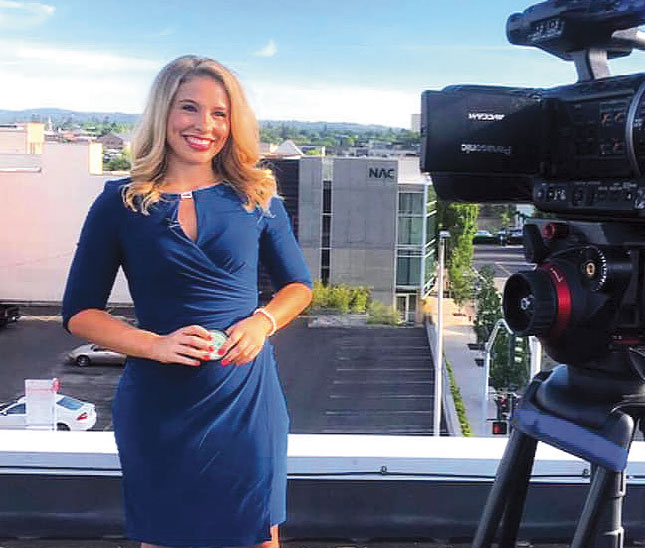 Video: Lilac Princess forecast in Spokane, with a shout-out to Cougs in Pullman