It isn’t always visible from the outside, but major damage to bridges, tunnels, and roads has left U.S. infrastructure in critical condition.

“In the last century the life expectancy of bridges was about 50 to 70 years old at the maximum,” says Washington State University civil engineering professor Pizhong Qiao. “But right now, we are past or near the limit.”

Qiao and doctoral student Ayumi Manawadu are developing and testing sensors to assess the health of concrete with a focus on bridges, without relying on visual clues.

Transportation workers typically assess the condition of bridges through on-site observation, photographs taken from aircraft, or larger sensors that must be drilled directly into concrete. But a few years ago, Qiao started thinking about a sensor that could go on the outside of a bridge to put together a picture of what was going on within concrete.

In the Smart Materials Lab, Manawadu takes a small metal hammer and hits a wafer-thin sensor smaller than a dime attached to a beam of concrete. She watches as her nearby computer collects information she can translate into the time, location, source, and severity of damage.

According to the 2019 Washington Infrastructure Report Card, the American Society of Civil Engineers graded the state’s bridges with a C+ and a C in overall infrastructure.

Qiao’s approach also relies on types of sound waves beyond the limit of human hearing: ultrasonic waves. They are Rayleigh waves, a type of surface acoustic wave that travels along the surface of structures. In fact, he often talks about bridges as if they were an older body, appearing healthy on the outside but still aging inside.

The tiny sensors, which can convert mechanical energy, such as squeezing or stretching, into electrical energy, send ultrasonic waves through the concrete to pick up on cracks or other damage. No drill required.

The team envisions the bridge sensors will join the ranks of other smart city technologies in the next few years—and there’s a good chance they will be monitoring some of the 7,300 bridges in Washington state.

In addition to an increase in population, demand for vehicles, and the natural course of aging, magnesium chloride in deicers used to clear ice and snow from roads the past twenty years have also softened and damaged concrete. WSU researchers hope to improve those conditions and earn a higher grade for infrastructure. 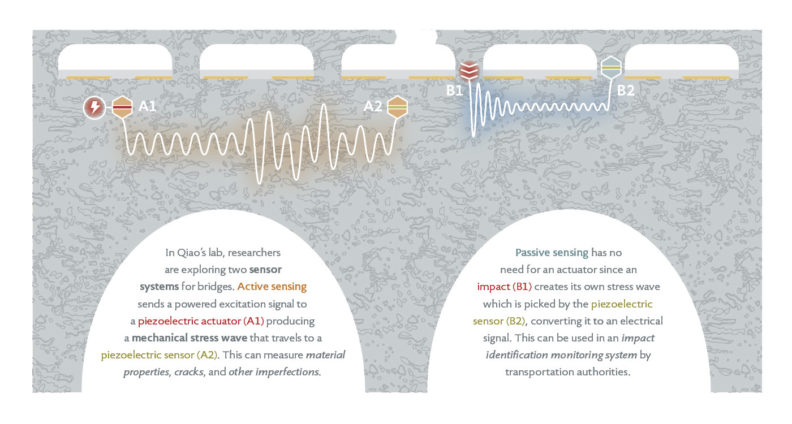 A PDF version of the illustration can be found here.