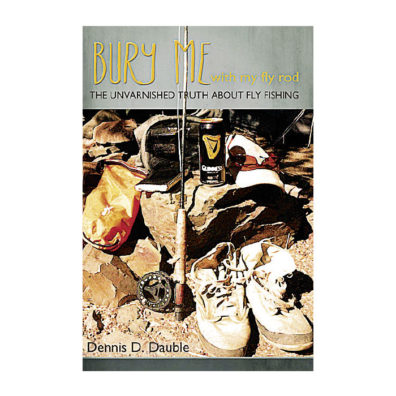 Dennis Dauble and his fly-fishing friends shun expensive gear and guided tours in favor of no-frills, self-planned excursions, which he details—often with humor, much of it self-deprecating—in his latest book.

This 214-page, softbound collection of short stories takes readers along on his fly-fishing trips from the South Fork of the Walla Walla and North Fork of the Umatilla to the Hanford Reach, along the Deschutes, Yakima, and Snohomish rivers, and beyond—ending with a fly-fishing trip to Scotland.

Dauble—a former fisheries scientist who also teaches fish ecology, biology, and management at WSU Tri-Cities—reminisces like he’s talking with an old friend, a long-time fishing buddy. His forthright writing style makes for an easy and fairly fast read, one fellow fly-fishing enthusiasts might want to bring on their next trip to the cabin or camping trip—along with their rods, of course—for inspiration, even recipes. Dauble includes an ode to peanut-butter-and-jelly sandwiches along with recipes for pan-fried rainbow trout, smoked steelhead, whitefish caviar, Scottish oats with whiskey and cream, and Mom’s Huckleberry Cream Pie.

He also discusses going fly fishing as a boy with his brothers and Grandpa Harry as well as later taking his own son and—these days—the grandchildren. Sometimes, he goes solo. Other times, he goes with his wife, who once noted, “You forget everything except every fish you ever caught.”