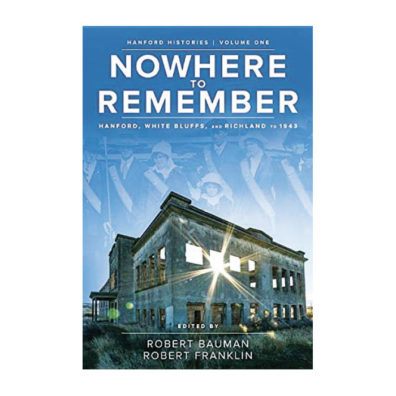 A husband-and-wife team of surveyors lodged with Leatris Reed’s family in White Bluffs before removal orders were given in 1943. “They didn’t even know what they were surveying for,” she recalls, only that “they were hired by the United States government” and “we thought it was an irrigation project.”

Her family had come to White Bluffs from North Dakota during the Great Depression because “there was fruit there”—fruit and food and a “reasonable” temperature. They came looking for a better life, and they found it—even though it was short-lived.

“Fruit farmers had to leave their crops on their trees. And that was very hard on them, no money, no future,” recalls Catherine Finley, another resident whose roots in White Bluffs trace back to 1898 when her father, Archie Borden, was born there.

Their stories are two of many that make up the backbone of this 196-page first volume in the Hanford Histories series. It details daily life in Hanford, White Bluffs, and Richland before the government forced out the towns’ residents. Many owned farms or businesses that had taken decades to build, and were given only about a month to vacate their homes for a new military wartime effort.

The top-secret Manhattan Project was established in 1943, and the area has largely been off-limits to the general public ever since. The WSU Tri-Cities’ Hanford History Project, founded in 2014, has collected more than 170 interviews from former residents, those who were children growing up in the Priest Rapids Valley during the 1930s and 1940s. Three such interviews, including Reed’s, are transcribed in full in the back of the book, which details all three communities going back to the late 1800s.

Because of its remoteness, the Priest Rapids Valley was one of the last regions of Washington state settled by pioneers. The 1902 Newlands Reclamation Act and arrival of irrigation led to population increases. By 1943, there were approximately 2,300 inhabitants in the area. Reed and Finley both recall the communities as close-knit and friendly. They were also hard-working communities, where families—including children—would rise in the wee hours of the morning to cut asparagus and bring the cows home to milk them before returning them to the pasture—and heading off to school.

When they were forced to vacate, some moved to Yakima and Sunnyside. Others ended up in Kennewick, Goldendale, Pendleton, and beyond. Finley’s family moved to Benton City. Reed’s went to Walla Walla.

Chapter three, written by Laura Arata (’14 PhD History), offers the distinct perspective of women in the valley. David Harvey, who’s spent more than 35 years in historical preservation, wrote the first chapter, an overview of the area and its early years. Michael Mays, a professor of English at WSU Tri-Cities and the director of the Hanford History Project, is the series editor. Robert Franklin, assistant director, and Robert Bauman, associate professor of history at WSU Tri-Cities, edited the volume.