The Presidents of Washington State University 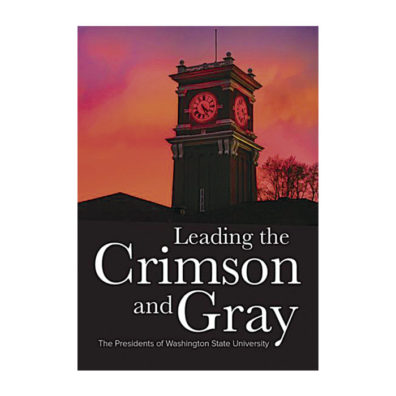 The long struggle to found a public university in the nascent United States began with George Washington. Washington offered to donate land to the cause, which he saw as common ground for those separated by the “jealousies and prejudices which one part of the Union had imbibed against another part.” Washington was ignored year after year by Congress.

It was left to Thomas Jefferson to found one of the nation’s first state universities, the University of Virginia, in 1819. That prototype would help inspire the land-grant Morrill Act, which Abraham Lincoln signed into law in 1862. Thirty-some years later, Washington’s land-grant college was founded in the wheat fields of the Palouse.

This, and more, can be gleaned from Leading the Crimson and Gray, an anthology of biographies of WSU’s first ten presidents.

Commissioned and published by WSU Press, the contributors are all sharp-eyed historians, either by profession or avocation. Each president’s biography covers the arc of his major accomplishments, as well as providing some psychological insight into what made these men tick.

“Don’t these people ever quit?” writes William Stimson (’89 MA, ’99 PhD History) in the introduction, referring to WSU’s tenth president Elson S. Floyd’s herculean push for the state’s second medical school. “The answer is no,” of course they don’t quit. That’s perhaps down to WSU’s famous tenacity but, more than that, Floyd’s drive is testament to the insistent championing of the land-grant philosophy that has undergirded the system of state universities since its inception.

The first two long-term presidents, Enoch A. Bryan and Ernest Holland, certainly began that tradition of dedication. They oversaw the growth of Washington State from 1893 to 1945, through two world wars, the Great Depression, and resistance to expanding the college’s mission. The two men essentially gave their lives to the institution. “Do you love Washington State College as I do?” Holland asked in his final words to his sister in 1950.

The presidents faced much adversity that tested their resolve, as well. Glenn Terrell led WSU from 1965 to 1985. At 9:00 p.m. one night in 1970, thousands of students staged a torch-lit march on the president’s mansion. Terrell came out to speak with the students—“just a little bit nervous,” he later admitted—to hear their demands. The result was a surge of commitment to diversity and a variety of anti-racism workshops, which drew over 20,000 people. Some faculty and alumni despised the man, but students came to love him as a champion of social justice.

Anyone interested in the history of WSU is well served by this volume. It documents the growth of Washington State and each biographical essay is filled out with photos from WSU’s large collection of archival images.

Purchase Leading the Crimson and Gray from WSU Press. (A portion of every sale—hardbound or paperback—benefits the President’s Excellence Fund.)