Sex is everywhere, researchers Stacey Hust and Kathleen Rodgers point out, but, strangely, we get very nervous talking about it—especially with our adolescent children.

That’s a concern to the two Washington State University collaborators, who just published a book, Scripting Adolescent Romance: Adolescents Talk about Romantic Relationships and Media’s Sexual Scripts, that examines the power of media, so chock full of sex and violence, to shape the gender roles of children and adolescents in ways that last a lifetime. 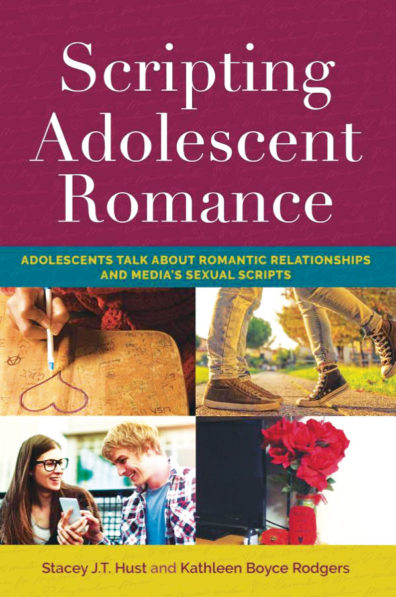 So powerful are the gendered “scripts” we consume in media such as TV, movies, video games, magazines, and music videos, we tend to assume they are biologically predetermined and inevitable. Hust, a health communications associate professor at the Edward R. Murrow College of Communication who focuses on the portrayal of gender, says, “The media depicts fairly narrow roles for both men and women. And not only are those roles heteronormative, promoting heterosexuality above all else,” the roles are very narrow “for how men and women can act.

“Men,” Hust continues, “are portrayed as sexually aggressive, that they are always interested in having sex, and that they need to be powerful and dominant and, conversely, women are the sexual gatekeepers. They are the ones who say yes or no, but there are consequences whether they say yes or no. They are shamed if they say yes, but they are also stigmatized for saying no.”

Even as we try to empower girls to aspire to greatness, our media are disseminating restrictive ideologies about who we are and what roles we should be playing. “We can select into a group that reinforces our notion of what we think being a male or female is,” Rodgers, associate professor in the Department of Human Development, says. “And it’s very binary. In particular, very young adolescents are more vulnerable to those messages.”

In the course of their research, Rodgers and Hust talked to more than 100 children. Together and individually, they’ve also studied the effects of reading and looking at men’s magazines on males’ willingness to seek consent from romantic and sexual partners (it reduces it), how women’s magazines empower women to refuse unwanted contact, how the intertwining of sex and violence in music videos affects young people, and adolescent risk taking.

In Scripting, Hust and Rodgers point out that adolescents spend as many as seven hours a day with media. One of the things they’ve learned is that parents tend to seriously miscalculate their kids’ access to media that portrays sexual interactions and, especially, narrow gender-role stereotypes.

The consequences for women include verbal harassment as well as dating violence or worse. “Even most of our youngest female participants, who were freshmen in high school, had already experienced some form of sexual harassment,” Hust says.

The consequences for men are just as bad. Starting from a very early age, boys are taught to be “sturdy oaks,” as psychologist William Pollack describes the “boy code.” Males are expected to stifle their emotions, be strong and silent, and “certainly privilege self over others,” says Hust. “And those are all themes that don’t bode well for good relationships,” she adds. Boys are also normed into being sexually aggressive.

Women perceive such aggressions as normal and that their only option is to disengage. One participant in the research, Willow (all names were changed to protect participants’ identities), “joined this app where people could post anonymous questions,” Hust says. “And the first question she was asked was, ‘Will you have sex with me?’ She’s 14. She got scared, deleted the app from her phone, and got off social media for a while. That type of sexual harassment now occurs at a much greater rate and can occur anonymously because of social media.”

Hust and Rodgers propose a simple solution that empowers parents and their children to work together to become more aware of the constricted roles media scripts impinge on us.

Talking about what parents and children are seeing in the media, be it a music video or the news, enables parents to get a sense of what their kids are reckoning with and empowers adolescents to reason through those scripts. Hust and Rodgers used clips from Pretty Little Liars, a TV show that was popular with teens, for example, to incite conversations about consent.

This isn’t about having the “one-and-you’re-done talk,” Rodgers emphasizes. Adolescents understand the biology and health ramifications of sexual activity. What they’re not getting, say the collaborators, is information about relationships, and that’s what they are hungry for.

“Parents and adolescents and everyone really should talk about relationships,” Hust urges. “We should be talking about sexuality.” News headlines and music videos that feature sex and gender stereotypes are inescapable and kids are soaking up information at a rapid rate. Left unchallenged or unprocessed in a safe, familial environment, that information is the genesis of negative stereotypes.

“You can choose to have a conversation with your teens,” says Hust, “so they are getting information that is consistent with your morals and your family values, whatever those may be.”

Tips for parents and adolescents on talking about sex, media, and gender roles

Since kids are discovering who they are, and what their gendered roles in life will be through media, Hust and Rodgers urge parents to tune in. Either watch with your kids, or watch what they’re watching.

Talk about It
Hust and Rodgers suggest bringing up a scene from, say, a movie or TV program and talking about it with your child. “One of the reasons we use media to get people to talk is because we believe that that third person, that other to talk about, is much less threatening. Use those teachable moments,” says Rodgers.

Ask open-ended questions about what media is showing us
If the scene portrays a young girl and an older man kissing, as they might have seen on Pretty Little Liars or a number of other popular-with-teens programs, ask your child what he or she thinks of that relationship. Ask what might have happened if the girl had refused the man’s advances.

Talk in the car
Parents, Hust and Rodgers say, should be listening more than talking, so driving is a good time to bring up sensitive issues. You and your child are in a non-confrontational position, since you’re looking ahead at the road.

Keep at it
Be open with your kids and keep asking for their thoughts about what they are seeing and experiencing. Together, you can reason through what you’re seeing and, potentially, learn if your child is experiencing difficulties or being harassed.

Read about the experiences of others who have navigated these waters
Hust and Rodgers say they weren’t thinking of it this way when they started writing Scripting Adolescent Romance, but as they got toward the end they realized “This’d be great for parents and older teens—high school juniors and seniors—to read together.”