Is there still an active Cougar yacht club? My friends own the Elmore, which was featured in your magazine in the early 2000s. It’s for sale now, in great shape, and still owned by the Cougar fans. It would be a great boost for the yacht club and could possibly keep it in the Cougar family. She’s still painted Coug colors and was built in 1890!

I was in the Signal Corps of the U.S. Army’s satellite tracking station at Ft. Stewart, Georgia, from April 1958–March 1959. I was working telemetry the night Cape Canaveral tried to send a rocket from Earth directly to the full moon above the east coast. The rocket went up 79,000 miles, turned around by gravity, and came back down. Since then all space travel goes up in orbit first and heads out into space. There were three satellites being tracked in spring of 1958, many more to follow. Our job was to watch their orbit path, to not drop down with a bomb attached, or burn up in space. It was an exciting time to be a part of NASA and the beginning of space travel.

Shane Dunbar ’56, a former agriculture and biology teacher from Everett, asked for some background on the illustration in “A mother’s microbial gift,” Winter 2017 issue. Specifically, he was interested in the relationships between the bacterial representations in the intricate editorial artwork by Colin Johnson. I asked our art director if there was, indeed, subtle information the work conveyed:

“Since research of microbiomes is in its infancy, we simply gave our illustrator the names of the bacterial genera that are some of the ‘important players’ in the story—Streptococcus, Staphylococcus, Pseudomonas, Serratia, and Corynebacteria. Scientists at WSU and elsewhere are busy investigating the complex microbial and host interactions. All concur that there is still plenty to do and many more exciting discoveries to be made. Therefore, we left the positioning and interplay of the bacteria in the illustration up to the artist. We really only aimed for the illustration to convey the intricacy of the subject matter rather than any specific biological relationships.

“We do many times ‘bury treasure’ in our artwork—sometimes instructional, sometimes just for fun—so Shane was right to ask if there was any present in this particular illustration.” 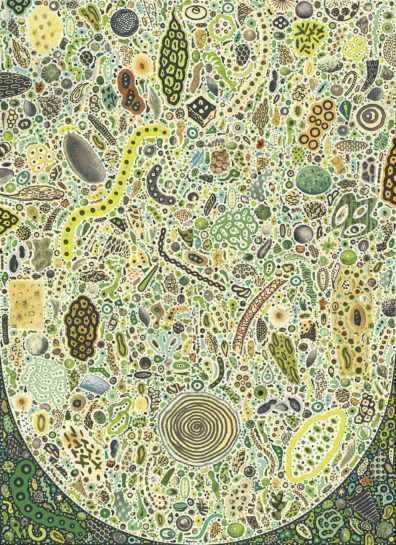 We are always most interested in our reader’s questions and comments that probe deeper into all the stories we tell. Remember to sign up for the monthly Washington State Magazine email newsletter to get previews of stories, videos, and more bonus features: magazine.wsu.edu/email.