In “Cougs at the Olympics” in the Talkback section of our Fall ’16 issue, Don Brust asked the question regarding what other Cougs had the opportunity to go to the Olympic Games. Another response:

In 1978 the U.S. Olympic Committee (USOC) moved its headquarters from New York to Colorado Springs. At that time I was working there for CPAs Haskins & Sells. The USOC’s business manager/controller did not want to relocate, so I decided to apply and was lucky enough to be selected. The end result was that I was able to attend two Pan American Games (San Juan in 1979, Caracas in 1983) and three Olympic Games (Lake Placid in 1980, Sarajevo in 1984, and Los Angeles in 1984). In every case, I had the privilege of working, and sometimes living, in the athletes’ villages during the games, which afforded me the opportunity to meet many of our Olympians. I left the USOC in 1987 to become executive vice president and chief operating officer for the U.S. Olympic Foundation (now Endowment) which was established using a majority of the USOC’s share of the surplus revenue generated by the 1984 L.A. games. I retired from that position last December, having worked for the USOC/USOF(E) for 38.5 years.

And more Cougs in space

I read the piece on “Space Cougs” and remembered that my good friend Phil Gollnick did research for NASA on muscle function after astronauts returned from days in space. He was a faculty member and not a graduate of WSU but could still have deserved mention in the article.

Editor’s note: Philip Gollnick, a physiologist and exercise science professor at Washington State University, conducted research on the muscles of astronauts who flew on the space shuttle Columbia. He used tiny muscle samples from the astronauts to study the effect of weightlessness on muscle tissue, building on 25 years of research into how and why muscles adapt to levels of high activity. Gollnick died June 28, 1991, at 56 years old. Gollnick taught exercise physiology at WSU, and the American College of Sports Medicine still hosts an annual Gollnick Tutorial Lecture.

Where in the world

Some of us who left Pullman have no idea where the WSU arboretum might be. It’d be nice if you could show a map where in Whitman County it might be found.

Once upon a time in Pullman, my family and I lived at 2105 Orchard Drive, up the street from the LDS church. We were directly across from (I assume WSU’s) apple orchard.

The previous editor had a tiny section in each issue about what’s new on campus—that was nice to see. I think the last time I set foot on campus was 1983.

Editor’s note: The arboretum is located on the very southwest of campus, to the east of Terre View Drive between the Pullman-Moscow highway and Grimes Way. We added a map in the online article that shows its location. If you want to explore it further, its coordinates are 46.727361, -117.135444. Regarding “What’s New,” we often feature new buildings and parts of WSU at the beginning of the Alumnipedia section. We’ll keep looking for opportunities in articles to feature changes at WSU—look for an upcoming short story on the new Cougar Way in the Winter issue.

I used to work at WSU and also completed my MBA there. I started receiving my alumni magazine and LOVE the paper and sustainable printing features. I have a client that is a recycling company and I would like to move them to something similar. Congrats on a stellar and beautiful magazine; I love getting it in my box.

Editor’s note: We really appreciate your thoughts. We did a lot of research in trying to break out of the norm (most large-run magazines print only on 10–30 percent recycled stock), and after a little perseverance, we think we came up with a good solution. We’re one of the few university magazines to use 100 percent recycled web stock. WSM has also joined the Better Paper Project, a national effort to increase use of recycled stock. Thank you for noticing!

I was saddened to read of the passing of Hubert Dunn in your summer issue. Hubie was a Big 10 gymnast at Southern Illinois University. After serving in the Navy, Hubie and his wife moved to WSC in 1948 to study for a masters in physical education. He also began to build a men’s gymnastic program. He identified about a dozen of us who were new to gymnastics and began to coach us into a team. He also encouraged other colleges in the Northwest to develop teams as well. Beginning in the spring of 1950, we participated in dual meets with Oregon State, Montana State, the University of Idaho, and the University of British Columbia. Some of my fondest memories at WSU were of Couch Hubie and the members of the gymnastic team he formed in those early years. 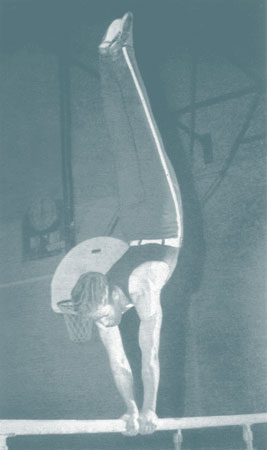 Sign up for the monthly Washington State Magazine email newsletter to get previews of stories, videos, and more bonus features: magazine.wsu.edu/email