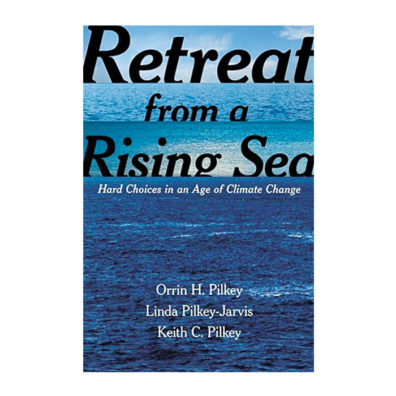 Hard Choices in an Age of Climate Change

Our planet’s rapidly changing climate will make the bursting of the real estate bubble look like a picnic on a sunny spring day. Upside-down equity and underwater mortgages don’t begin to describe the scope of what rising sea levels are going to do to us.

The grim picture painted and the solid evidence presented by the Pilkeys in Retreat from a Rising Sea is one of inexorable foolishness and inequity.

Instead of buying people out of their repeatedly flooded coastal homes and businesses, the National Flood Insurance Program forks over billions of taxpayers’ dollars to enable people to rebuild in the same spot. And then we do it again, after the next storm, and again, in a grotesque Groundhog Day.

“‘We’ll be back because we are Americans and we don’t give up’ is the cry often heard after a big storm has blown by,” the Pilkeys write. Fortitude is an admirable trait—if an outcome other than the inevitable can be expected.

But the results won’t be different; there’s going to be more of the same, more frequently, and worse, much worse. Miami and New Orleans are doomed, the authors argue. New Orleans is sinking, and Miami sits on top of a limestone sponge. There is no escaping the waters.

“Like it or not, we will retreat from most of the world’s nonurban shorelines in the not very distant future. Our retreat options can be characterized as either difficult or catastrophic,” the Pilkeys write.