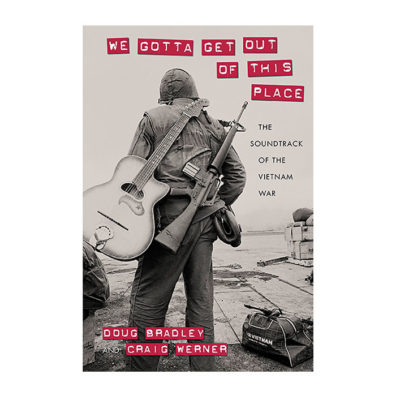 Music is embodied, a word that means it grabs you by the guts until you do something: dance, weep, make love … something. Music is visceral in another way, too: We connect the dots of our personal histories based on the tunes we were listening to at the time.

For a veteran, that might be more than she bargained for. Hearing a song first experienced when her life was in danger might result in memory replaying the original trauma. Then again, she might recall the comradeship that enveloped her and pine for times and friends long gone.

But music can also be ephemeral and evanescent. That’s why We Gotta Get Out of this Place is so important: It preserves the impressions of those who were in the Vietnam War, listening, shooting, trying to stay alive.

For authors Bradley and Werner, and those they write about, the music is part of a cultural milieu we all share. Even if we were born after the Vietnam War ended, we know the songs. Consider, then, what Nancy Sinatra singing “These Boots Are Made for Walking” means to you—and then think what it must have meant to an 18-year-old boy in boot camp or, eight weeks later, a man slogging through a rice paddy.

Or, take Hendrix at Woodstock: The fringed white vest and red bandana are now icons of those three days of love, mud, and music. But Hendrix’s deconstruction of “The Star-Spangled Banner”—rent with machine-gun staccato riffs and the dropped bombs of whammy-bar bent notes—made us hear things we’d never heard before, in a national anthem or anywhere else. For Hendrix’s friends in the 101st Airborne, the rendition was the perfect evocation of the hell they were living through. And, yes, Hendrix was indeed in the 101st—but was drummed out, per one of his sergeants, because he couldn’t simultaneously perform his duties and think about his guitar.

In the course of We Gotta Get Out, we hear what all those great songs meant to those with boots on the ground in Vietnam. We also hear the voices of the men and women who knew that music in the context of their service and how it changed them. More, we realize that music is always already changing our perception of the world. In the words of Dave Rabbit, the renegade broadcaster who ran Radio First Termer from a hotel somewhere in Saigon, “Take heed. And take care.”