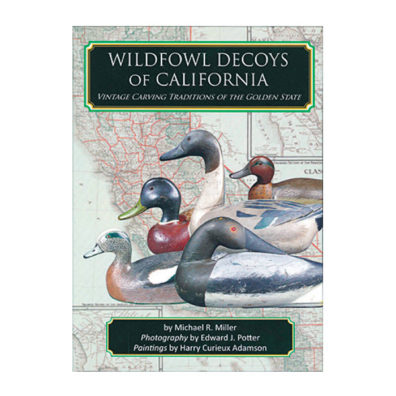 More than 40 years ago, Michael R. Miller ’68 was passing through a Sacramento antique shop when he came upon a carved duck decoy. It was a pintail drake. Carved from a single piece of redwood, it had an elegantly pointed bill and tail and subtle shades of gray, black and off-white. Like so many of its ilk, it was just outside the ordinary aesthetic of art, but worthy of the moniker “art that came unasked.”

As a child, Miller hunted with his grandfather and father across the scabland waters and wheat fields outside Spokane. He was fascinated by their wooden decoys, but at the time deployed duller birds, usually of plastic.

The Sacramento decoy set him in a new direction, in a big way. While they once dabbled with the fishes in muddy swamps and sloughs, vintage decoys have taken their place alongside some of the most coveted works of folk art. Antiques Roadshow viewers have seen them valued at $10,000 to $20,000. Works by A. Elmer Crowell, a revered Massachusetts carver, have sold for more than $1 million.

Miller and Frederick W. Hanson wrote Wildfowl Decoys of the Pacific Coast, a 384-page look at decoy-carving from California to British Columbia, in 1989. Miller, a retired federal waterfowl biologist, notes in his preface to Wildfowl Decoys of California that he has “doubled the hardbound decoy history of the West.” And then some, if you consider that this book comes in at a lap-crushing 679 pages, with scores of color photographs and short biographies of more than 300 carvers dating back to the late nineteenth century.

Among them: Ed Frederickson, the carver of the decoy that set Miller on this course. A Spanish-American War veteran and blacksmith, Frederickson carved redwood that schooners brought from California’s Humboldt Bay to a Rio Vista lumberyard where he worked. He hunted a little, but mostly he carved pintails and canvasbacks that took on what came to be known as the Rio Vista style.

Frederickson worked in a dark era of waterfowl hunting, as many decoys were made to serve market hunters. From 1870 into the 1930s, they slaughtered massive numbers of birds and other game to serve San Francisco and Los Angeles diners. Conservation laws stemmed the carnage, and decoys over time came to be seen as folk art and floating sculptures.

The book and its predecessor are largely for collectors, curators, and scholars. But as a testament to a hidden craft’s beauty, and one man’s commitment, it has few equals.