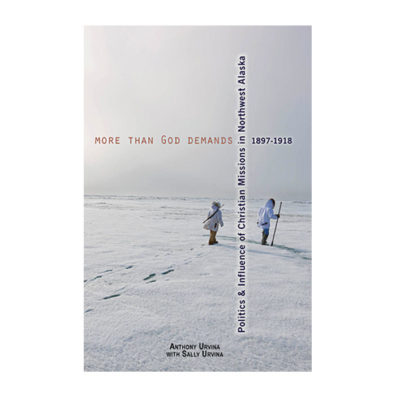 Tucked away in cabinets and forgotten closets at the Alaska regional offices of the Bureau of Indian Affairs in Juneau was a collection of old documents known simply as the Reindeer Files.

Anthony Urvina ’85, a natural resource manager at the BIA, began digging through them in 2003 while trying to locate information for an Alaskan tribe about a 1920s stock certificate. What he found instead was a troubling history of cultural decimation and an emotional journey of understanding into his own ancestry.

In More than God Demands, Urvina chronicles the devastating effects on Alaska’s native populations of intertwining U.S. policy and Christian ideology. Missionaries were given broad latitude under the authority of the U.S. Department of Education to “civilize” the Alaskan frontier, an approach that was seen as easier on the federal treasury.

Backed by the federal government, Christian missionaries began replacing thousands of years of indigenous Alaskan history through forced relocation of native populations and the banning of cultural practices and traditions.

“The American government, in collaboration with the American Church, had merged Christian ideology with Anglo-American culture to define the terms of ‘civilization,’” Urvina writes. “The merger would characterize an Alaska Native pathway to citizenship. For an entire generation of Inupiat, that new path in life would lead to personal loss and destruction, expressed starkly within the Reindeer Files.”

Woven into the history is a tale of self-discovery as well.

Urvina’s mother was a native Alaskan orphan removed from her village and raised in one of the missions. The Reindeer Files helped Urvina better understand his mother’s early life and he uses it as a narrative arc to personalize otherwise bureaucratic reports and correspondence.

The book’s title is drawn from the comments of an early-1900s Quaker missionary, Otha Thomas, who once observed: “Sometimes, I think the church expects more of the Eskimo than God demands.”