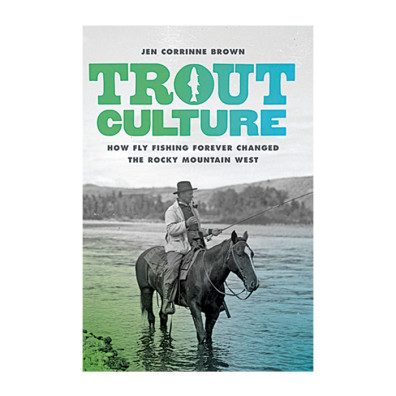 With help from Hollywood and even popular beer labels, the Rocky Mountain region of the American West enjoys an iconic reputation for wild and natural fishing. It’s where rugged individualists reconnect with nature through timeless traditions.

Missing from the customary narrative are the generations of human intervention, environmental manipulation, and social transformation.

Brown, who earned a history doctorate from WSU in 2012, calls it the biggest fish story ever told.

“In reality, the exceptional (and oversold) trout fisheries of the West are neither wild nor natural, but now exist because of drastic and complicated environmental and social changes,” Brown writes.

An avid fly fishing enthusiast herself, Brown has dug through American history to piece together the tale of how the Rocky Mountain West’s prized trout fishery was cleverly engineered.

Popular species favored by sportsmen were introduced to the region’s waterways, eradicating native fish populations. By the early twentieth century, western hatchery systems were churning out millions of rainbow, brown, and brook trout. The regional fishery quickly developed its own lucrative identity.

“This popular pastime and growing economy, however, rested on environmental change and massive amounts of trout stocking,” notes Brown, who now is an associate professor at Texas A&M University. “These conceptions of place and region and their accompanying hatchery activities caused the devastation of western native fish.”

Brown traces fly fishing back to its European roots and how the emerging trout culture helped shape development of the west­ern United States and the growing political influence of the region’s sport fishing industry.

Now, some states are trying to restore native species, an issue Brown explores but steers clear of embracing, particularly because it often involves the use of toxicants.

“Their quests to preserve native fish are valiant, even if the means need to be reexamined,” she writes. “And although anglers have ignored native concerns in their Rocky Mountains with the big trout, their continued romanticization of western fly fishing has been beneficial for other environmental issues.”

Despite overturning the notion of a wild and natural Rocky Mountain fishery, Brown also examines the trout culture’s activism and the durability of fishing as a pastime, as she remains optimistic overall about its future.