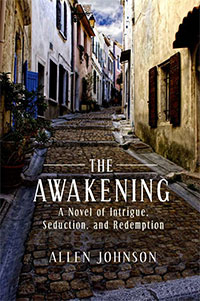 The Awakening weaves effortlessly through time, from the battle-scarred streets of Spain in 1936 to nearly 60 years later as it tells the life story of Diego Garcia and his descendants.

In this unconventional romance novel, Diego Garcia dropped everything to be with the Moroccan beauty of his dreams, Lupe. The two newlyweds headed to Granada, Spain, to start a life of their own in the 1930s. The two loved each other immensely, and where there is love there is compassion. The story leaps forward almost 60 years to Diego’s granddaughter, Lupita, a young physician. Diego is now a Spanish Civil War veteran with an enduring desire to save people in honor of the ones he couldn’t protect in the war.

In 1990, Diego stumbles upon an unconscious American man lying helplessly in the road. The man is in critical condition, and is too battered to survive the ride to the hospital. Diego doesn’t have the heart to leave him behind, so he brings him to his home where he lives with Lupita. She takes care of the man as he lays in a restless coma, and the young doctor wonders what he could possibly be reliving in his agitated dreams.

The man awakens with amnesia, and spends the next four months trying to recall what happened to him, but some things are better left unknown. As the story unfolds Diego, Lupita, and the beaten man, whom they named Antonio, journey together in a story of life, love, and redemption. Weaving through the life of Diego Garcia, the author brilliantly illustrates the restorative power of time.

Johnson graduated from WSU in 1985 with a doctorate in counseling psychology. He has published several books.