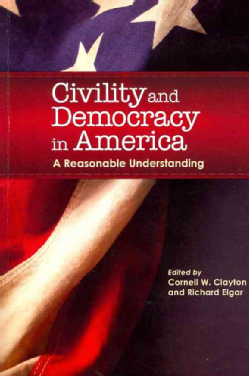 This collection of essays from WSU professors and other scholars takes a hard look at the historical and contemporary state of civility in the country, probing the complexities and the causes of the current “crisis.”

The collection of essays emerged from a 2011 conference on civility and democracy held under the auspices of WSU’s Foley Institute for Public Policy and Public Service. The conference was one of four that brought together academicians and professionals from many disciplines to probe the rise of contentious political discourse.

The volume is edited by Cornell W. Clayton, WSU political science professor and director of the Foley Institute, and Richard Elgar, assistant director of the institute and a doctoral student at WSU. They also wrote the foreword and Clayton’s introduction, which capably places the rise of political incivility in historical context and bursts the illusion of a “golden age” of democratic discourse by pointing out that rhetoric (and sometimes violence) rises in times of major transition.

Matthew Avery Sutton, an associate professor of history at WSU, writes about faith and religious influences on democracy and civility. WSU architecture professor Ayad Rahmani shows how architecture plays a part in democratic interactions beyond mere bricks and stone, by giving spaces for citizens and lawmakers to interact. Lawrence Pintak, dean of the Edward R. Murrow College of Communication, introduces the fragmentation and changing landscape of media and its role in civility.

The book also includes the work of scholars from Stanford University, Georgetown University, the University of Chicago, and other institutions, as well as professional journalists and architects.